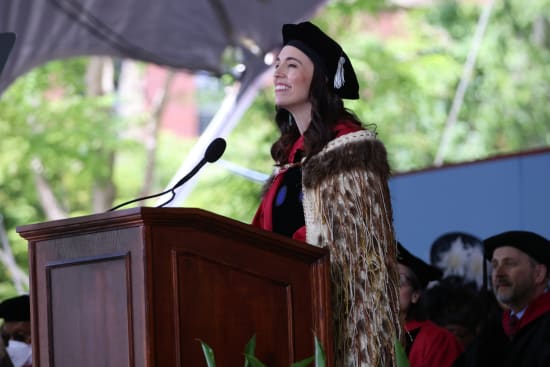 Bard manque Victor Billot on the PM in the US

A Red Empress in the Court of a Connecticut Yankee

Lo, the winter lay its frosty breath on the land;
and the days were short and the dried kippers were tough.
Queen Cindy had spent twenty seven consecutive months
locked in the High Keep, while the plague raged
beyond the walls; and all the while Baron Luxon
and his Blue Meanies lay siege at the Gates.
“I am not content,” sayeth the Queen, drumming her fingers
on the armrests of the Mighty Throne.
“This post-Wellness Budget low has gotten me down.
It’s time for a mini break!
Prepare Royal Air Force Balloon Number One!”
So the court, who had been kind of glum too,
swung into immediate and loud busy work.
Seven Ministers prepared a novel and inclusive
Partnership approach to creating a working group
to consult widely among diverse communities
for a mission statement for the terms of reference.
Meanwhile, Balloon Number One slowly inflated
as the Chancellor stoked the flames of the hot air machine
with seventy five billion worthless paper doubloons.
The Queen ordered Royal Consort Gayfforde released
from the Gisborne District Dungeon,
where he had been held pending charges
of trafficking UFOs and impersonating Elvis.
And so it was the happy travelers floated away
from our Mighty Queendom, up into the clouds
while the Royal Escort of Pink and Occasionally Green
Nonbinary Airborne Unicorns circled in joy.
“Are we there yet?” ask the Queen, looking down.
“No, your Majesty,” came the reply;
“that land far below is the Kingdom in the North,
one of your many domains.”
“And who are those loyal serfs waving so friendly?”
“Those are the loyal townspeople fleeing
from the Killer Beez and the Tribesmen, your Majesty,
and seeing a ride out of there.”
The Queen smileth radiantly and waveth back.
Then the Royal Entourage arrived in the Colonies,
to relax and enjoy the rustic and homely hospitality
of the curious locals, and accept their quaint gifts.
“And who is this toothless antique who bows before me?”
asketh the queen.
“This is Ol’ Methuselah, the Village Headman,”
replies the Ambassador.
“And what mumbleth he?” asketh the queen.
“He is asking how we avoid crossbow massacres
amongst the peasantry, your Majesty!”
And the Kind Queen smiled magnificently;
and the Great Hall was lit by her glowing radiance,
and she said, “O that is simple!
We just give all the crossbows and nasty loppers
to the Killer Beez and Tribesmen,
who massacres each other.”
And the Rustic Colonists cheered this wisdom
and presented the Queen with their highest honours;
and all agreed it was the finest mini-break
in living memory.

Charging e-cars at work: you need to know that!