Facebook Twitter LinkedIn Tumblr Pinterest Reddit VKontakte Odnoklassniki Pocket
● The Q4 e-tron is the first Audi on the MEB group platform
● The steering wheel and bottle holder make the interior special
● Prices start at 41,900 euros
Curtain up for the new Audi Q4 e-tron. With her first MEB model the Ingolstadt-based company show their vision of an electric car on the new group platform. In addition to the Q4, the model siblings VW ID.4 and Skoda Enyaq iV have also used the substructure from Wolfsburg so far, but optically have absolutely nothing to do with the Audi. Like its technology brother ID.4, however, the Q4 e-tron also rolls off the assembly line in the VW multi-brand plant in Zwickau. All information about the first electric compact SUV from Audi.

Engines and price: new entry-level quattro for the Q4

Although the Q4 e-tron is still very fresh on the market, there are already substantial discounts. At carwow.de (cooperation partner of AUTO BILD) you can currently save up to 12,950 euros below the list price (Status: January 12, 2022), the purchase premium for electric cars is already included here. 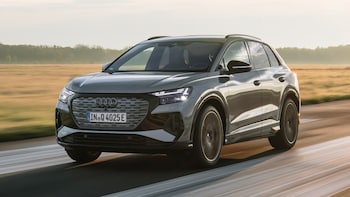 Buy Audi Q4 e-tron at a discount at carwow.de

Ranges of the Q4 e-tron according to WLTP: overview

Audi offers two battery packs for its Q4 e-tron. While the smaller battery theoretically with 55 kWh can come up, the large power storage comes on arithmetic 82 kWh. But neither of the two batteries can take that much power. The gross information differs for technical reasons from the actually usable net capacity. In everyday life, the Q4 e-tron is only able to carry 52 kWh or 77 kWh of electricity with it. What that means for the range with the different engines can be found here:

Dimensions: Exactly between Enyaq and ID.4

The Audi is 4.59 meters long, 1.87 meters wide and 1.61 meters high. Together with the wheelbase of 2.76 meters, plenty of space in the interior is guaranteed on paper. The trunk swallows between 520 and 1490 liters. That’s the Ingolstadt slightly shorter than his corporate brother Skoda Enyaq iV, but a little longer than the VW ID.4.

Driving report: Out and about in the Audi Q4 e-tron

AUTO BILD is the Q4 e-tron driven. The SUV basically behaved in this way noticeable. The landing gear bounces like a limousine, the start was typically good for an electric car. the fine engine control However, this sets the SUV apart from other models. The detailed driving report is available here.

In addition to the hatchback, Audi also offers the Q4 as a coupé-like Sportback. The two SUVs do not differ up to the B-pillar, but after that the roof of the sporty derivative falls off visibly. The rear ends in a two-part rear window, which is separated by a spoiler. Unusual: With 535 liters trunk volume the Coupé even offers more space for luggage than the SUV in everyday use. Despite the steep sloping roofline, that is Space in the rear but still goodt. With a height of 1.80 meters, the Q4 e-tron Sportback is also fun in the second row on long journeys.

Optics: Q4 will be a typical e-tron

Even if Audi by and large uses VW group technology in the Q4, the Ingolstadt-based company is allowed to do so optically completely independent remain. Outwardly, the e-tron has nothing in common with its platform brothers and relies on the technical design approach known from Audi. As is typical for e-tron, the front remains closed and has a first Audi closed Audi rings. They host the Sensors and will probably also be found in this form in other models in the future. If you want to personalize your Audi, you have the option of the Change signature of daytime running lights.

LED headlights are always standard, only those who do Matrix technique have to dig deeper into their pockets. On the side are the exhibited wheelhouses, which are called blisters in Audi jargon. The rims vary between 19 and 21 inches as required. (Click here for the AUTO BILD summer tire test) The Q4 comes with every version classic mirrors be equipped. The compact model does not have an option for cameras, as is possible with the Audi e-tron. There are also LED taillights at the rear, which are connected to one another by a continuous strip of lights.

AUTO BILD made the seat test in the Q4 e-tron: That cockpit looks very technical, which is not least due to the new Audi steering wheel. The functions of the touch surfaces are identical to those of the ID.4, but have their own layout. The impact pot carries the for the first time Audi rings in 2D optics. As an option, the screen grows to 11.6 inches for the first time in an Audi. Below is the climate control. It can still be controlled with buttons. in the Fund comes the big wheelbase especially the Legroom benefit. It is roughly on par with the current Q7. That means long-haul quality for the second row. The full seat sample is available here.

As with all new models in the VW Group, this also builds infotainment of the Q4 e-tron on the MIB 3 on. The modular infotainment kit gives the Audi a multitude of features. But the system is also in the electric Audi basis for the Augmented reality head-up display. It blinds the person in the driver’s seat dynamic navigation arrow and Warning notices directly into the field of vision. The system is reminiscent of the Mercedes S-Class, but in the Audi it is not quite as finely tuned. No wonder, the Audi has to do without eye tracking cameras. For a vehicle in the compact class, however, the function is well done. You can find a first impression of the system here.

Equipment: heat pump and progressive steering for the Q4 e-tron

Two dynamic packages can be ordered for all Q4 e-trons on request. The first package includes a Sports suspensionthat the Q4 around 15 millimeters lower lays. It also clearly focuses on sporty driving. For more spread in everyday life, there is also a plus version of the chassis Adjustable damping. The first dynamic package is in the S-Line Series. All e-trons with sports suspension also receive one Progressive steering. For better air conditioning of the interior on cold days, a optional heat pump. It uses the waste heat from the battery to heat the interior. On the one hand, this helps to shape the temperature management of the battery and ensures a longer range in winter, as no heater fan uses energy.

Corona absenteeism is sand in the engine of companies: 'It is muddling on'

After entering Formula E: does Maserati have an eye on F1?