Facebook Twitter LinkedIn Tumblr Pinterest Reddit VKontakte Odnoklassniki Pocket
Audi will launch the third generation of the Q7 in 2025. The Ingolstadt-based company has completely renewed its luxury-class SUV a decade after the second generation and a full two decades after its presentation at the IAA. AUTO BILD has created the first illustrations and knows what the new Q7 will look like. 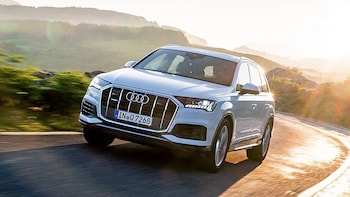 Get the best offers for the Audi Q7 and save an average of €7708 compared to the RRP at carwow.de.

Combustion off at Audi

According to Audi, the last new combustion engines will roll off the assembly line in 2025. But that doesn’t mean that after 2025 there will only be electric cars. With an average service life of around seven years, the last new combustion engine with the four rings on the radiator grille will probably only roll off the assembly line in the 2030s.
Then there is the fine print: First, the announcement refers to Europe and North America. Combustion engines will continue to be built, especially in China. The fact that the Q7 is now being renewed after the facelift in 2019 is important with a view to North America and China. Both are the most important markets for the Q7. AUTO BILD knows from Audi insiders: The Q7 will be even more massive, appear even more stately than the current generation with a giant cooler, narrow light slits and a high hood. Designs that have traditionally been well received in China and North America.

Fuel price check to the minute

This is how the gas price is at gas stations in the area!

In this country it is now time to slowly say goodbye. At the same time, there is reason to be happy. Audi CEO Markus Duesmann has already announced that Audi’s latest combustion engine will be “the best we’ve ever built2.

Sure, he has to, after all, the Euro 7 standard should be tough, and only the cleanest, most efficient engines ever have a chance of approval. But that also means: There will probably no longer be a V8, six and four cylinders, some with electric support, will have to do.