The Ferrari F40 by Udai Hussein has reappeared. After many years, the more than one million euro F40 is still in Iraq!

Dhis Ferrari F40 has a very special story! The Ferrari, which is now over one million euros, belonged to one of Udai Hussein, the son of dictator Saddam Hussein. After being lost for years, the F40 has now reappeared!
A few weeks ago, the British Ferrari owner and youtuber “Ratarossa” launched a call. In a detailed video, he explains that he would like to add his absolute dream car to his small Ferrari collection (355 Spider, a converted 360 Challenge Stradale, Testarossa Spider and a 308). We are talking about the F40 built around 1315 times between 1987 and 1992! In 2015 “Ratarossa” was about to buy a Belgian F40. Five years ago he was actually offered an F40 for 225,000 euros. But despite all efforts, he could not get the deal on the stage and within a few years the prices for F40 rose to over a million euros, making his dream car seem unattainable.

This is not a normal Ferrari F40 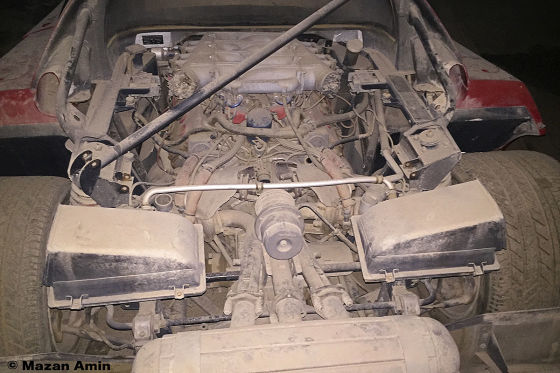 The V8 biturbo with 478 hp is completely dirty. Parts like the intercooler are completely missing.

But the Brit has a plan – he wants a very specific F40. This is the car of Udai Hussein, the son of dictator Saddam Hussein who died in July 2003. According to various sources, this F40 is said to be in Iraq to this day – in a pitiful condition. With the help of his community, “Ratarossa” wanted to track down this F40 and ideally import it to Great Britain and completely rebuild it.

The story behind this Ferrari F40 is more than opaque. When the war started in the 1990s, according to insiders, the F40 was in a workshop in the Iraqi city of Erbil and was simply forgotten. The result: the 478 hp F40 rotted in the sweltering heat for several years. Udai Hussein was a huge car fan and collector and is rumored to have owned over 1,000 cars. When the troops marched in, he reportedly ordered the cars to be lit before they could be confiscated. But several cars were apparently spared, because there are pictures of a Porsche 911 (993), a Ferrari Testarossa, a Lamborghini LM002 and the said Ferrari F40. It is unclear why these vehicles were spared. What is certain is that the F40 was photographed at different locations in the following years, the last known photos dated from 2012.

The exterior mirrors and steering wheel of the Ferrari were missing 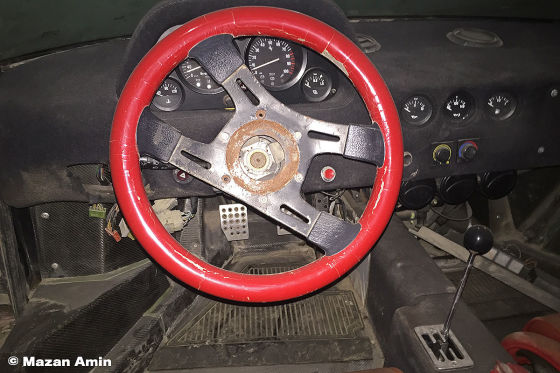 This shows that the F40 is in a catastrophic condition. Many years in the scorching sun have hit the super sports car. The exterior mirrors are missing, the tires are flat, the original steering wheel has been exchanged for a cheap spare steering wheel and the seat cushions are torn. The worst part is the sand. Over the years, this seems to have found its way into every little gap – whether cockpit or engine compartment.

The F40 was actually found 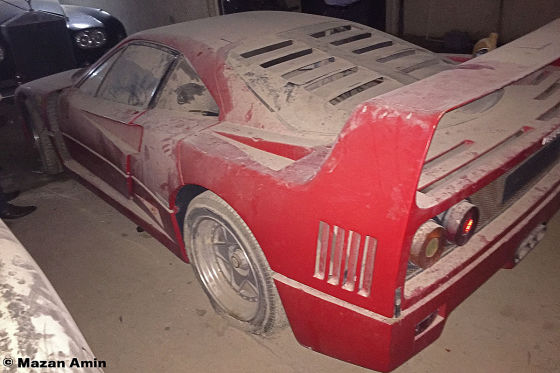 A Ferrari F40 in a pitiful condition: a thick layer of dust covers the expensive super sports car.

After the call, the video of “Ratarossa” went viral and the feedback was huge. So big that the F40 was actually tracked down by Udai Hussein after only a week. Mazan Amin, who tracked down the owner and the F40 together with his father in 2015, made a significant contribution to this success. After extensive research, he found that the F40 was still in Erbil. Mazan was even lucky enough to see the F40 live and was able to take a lot of photos. The owner explained that the F40 was flown to Turkey for reconstruction. However, when it came out that Udai Hussein was the previous owner, the Turkish workshop owner no longer wanted to surrender the Ferrari. Under adverse circumstances, the current owner got the F40 back, but until then there were no more parts.

Mazan was even able to negotiate a deal, the owner wanted to sell the F40 in its completely rotten state for 300,000 US dollars (today about 277,000 euros). For various reasons, however, this deal did not come about. But Mazan didn’t want to give up so quickly. He then contacted the owners of the US workshop Gas Monkey Garage, which had recently rebuilt an F40 accident car as part of their TV show. They were also interested in the Udai Hussein F40. However, since US citizens had difficulty entering Iraq at the time, they sent colleagues Chris from Great Britain to Iraq in early 2016 to take a look at the F40 on site.

in the “Ratarossa” video Chris remembers that this F40 was the worst-preserved F40 he’d ever seen. The F40 was repainted several times, intercoolers and control units were missing and there was sand everywhere. The biggest problem, however, was the lack of documentation: getting the F40 out of Iraq reasonably unscathed seemed impossible. Chris was warned: If he loaded the F40 into a container and transported it through Iraq, there would be a good chance that the container and thus the valuable cargo would be shot at. Finally, Chris explains that although the F40 had an incredibly interesting story and that the price was okay at the time, the risk and the costs of the reconstruction in combination with the incredible logistical effort were too delicate for him and he left undone.

Only 3764 kilometers on the speedometer 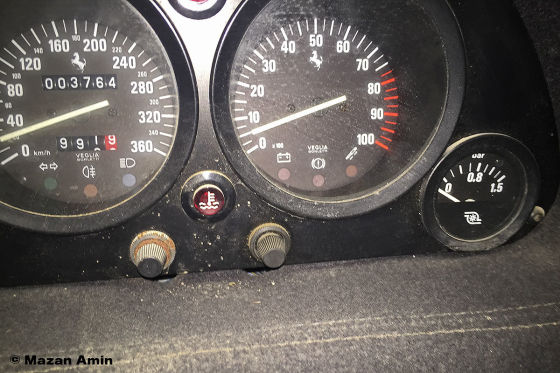 The F40 has traveled just 3764 kilometers in its long and arduous car life.

Anyone who thinks that the story behind this special F40 ends at this point and that the car is doomed to perpetual rotting is wrong. At some point after Chris’s visit, the current owner must have decided to breathe life into the F40 on his own. For this purpose, a Ferrari specialist from Belgium was flown in, who had previously worked on several F40s. First of all, the complete V8 biturbo, which had only been driven for 3764 kilometers at the time, but had not started for many years, was removed, dismantled and built up piece by piece with many new parts. Subsequently, new engine control units had to be procured and programmed, and so the F40 was restored over a long period of time.

The F40 did not reappear until the end of 2019. But then already in a partially restored condition. There is a video to see that the F40 is actually driving again. Behind the wheel was the Belgian Ferrari specialist, who apparently carried out a test drive. Today that F40 is still in Iraq. This is evidenced by new photos and even a video that Mazan Amin recently received from the owner. The V8 biturbo has been extensively restored, but it doesn’t sound quite healthy in the video, the misfires are enormous. In addition, the exterior mirrors are apparently missing to this day.

Current price: over one million euros 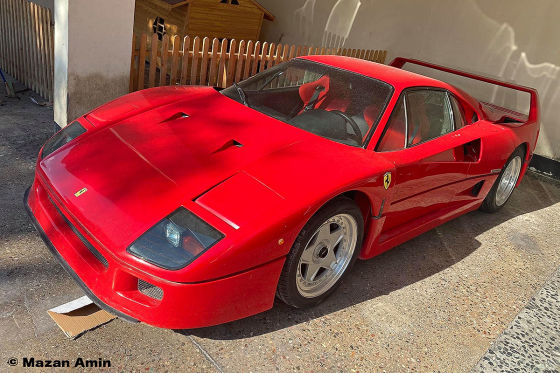 In the meantime the F40 has been restored and looks much better. The exterior mirrors are still missing!

Despite the shortcomings, the F40 seems to be in a much better condition today than it was a few years ago. With the help of Mazan Amin, “Ratarossa” was able to contact the owner to ask if the F40 was still for sale. The answer is yes! However, the price for the completely neglected F40 has increased from $ 300,000 to $ 1.15 million. For this price, there are already well-maintained specimens that are available without any logistical masterpiece, but also without this crazy story. Due to the high price alone, “Ratarossa” had to refrain from buying it, and so the Ferrari F40 by Udai Hussein will probably stay in Iraq even longer. Incidentally, he does not want to reveal how the current owner came to the F40.

The most important smartphone camera features for 2020

11 things only a spectacle wearer understands