The Democrat, who became the 46th President of the United States on Wednesday on a call for “unity”, immediately took a series of decisions marking a clear break with the mandate of his predecessor, which tore Americans apart and shook the world.

The Democrat, who became the 46th President of the United States on Wednesday on a call for “unity”, immediately took a series of decisions marking a clear break with the mandate of his predecessor, which tore Americans apart and shook the world.

(AFP) – Joe Biden wasted no time. After having solemnly taken the oath on the steps of this same Capitol stormed two weeks ago by Trumpist militants, the Democrat arrived at the White House and signed several presidential decrees to face the multiple and deep crises that are going through America and revisit the flagship measures of the Trump era, notably by committing the return of the United States to the Paris climate agreement and to the World Health Organization.

“We are going to fight against climate change as we have never done before,” he declared. And, from Thursday, the famous immunologist Anthony Fauci will represent the United States at a meeting of the WHO. Biden also ended the ban on entry to the United States for nationals of predominantly Muslim countries – one of the controversial first steps taken by his Republican predecessor.

A few hours earlier, just before noon, Joseph Robinette Biden Jr was sworn in, handing over the family bible held by his wife Jill, promising to perform his duties “loyally” by defending the Constitution of the United States. This investiture ceremony at the Capitol was a compendium of contrasts.

Contrast with the violence of January 6, which left five dead and aroused indignation. And contrast between the serious speech but imbued with “hope” delivered by Joe Biden and that, dark and offensive, of his predecessor four years ago. The one who became at 78 years the oldest president at the beginning of mandate multiplied the calls for “unity” to overcome this “dark winter”, a few hours after the departure of Donald Trump, who left Washington without attending this historic moment.

“I know that the forces that divide us are deep and real,” said the Democrat, to the applause of guests handpicked due to the pandemic. Posing as “president of all Americans”, Joe Biden warned that the United States would enter “the hardest and deadliest phase” of covid-19 which has already killed more than 400,000 in the country.

The day will remain in the history books also because of the accession, for the first time, of a woman to the vice-presidency of the first world power. Former black and Indian senator Kamala Harris, 56, was sworn in just before Joe Biden. Unprecedented for 150 years, the outgoing president therefore shunned the inauguration ceremony of his successor, having left the White House without even having met him. Donald Trump, however, left him a letter, “very kind” according to the new president, who did not disclose the content.

In public, the former real estate developer only wished “good luck” to the new administration without ever saying the name of Joe Biden. And promised to return “one way or another”, before arriving in Florida to start in his club Mar-a-Lago, at 74, his life as a former president. Its vice-president Mike Pence was at the forefront of the inauguration ceremony.

Emu, Joe Biden, dark suit and sky blue tie, masked on his arrival like all the guests, gave the hug to Barack Obama, of which he was the vice-president. Pop star Lady Gaga sang the national anthem, wearing a puffy red and black dress and sporting a large gold brooch depicting the Dove of Peace. Then Jennifer Lopez sang “This land is your land” (“This land is your land”). 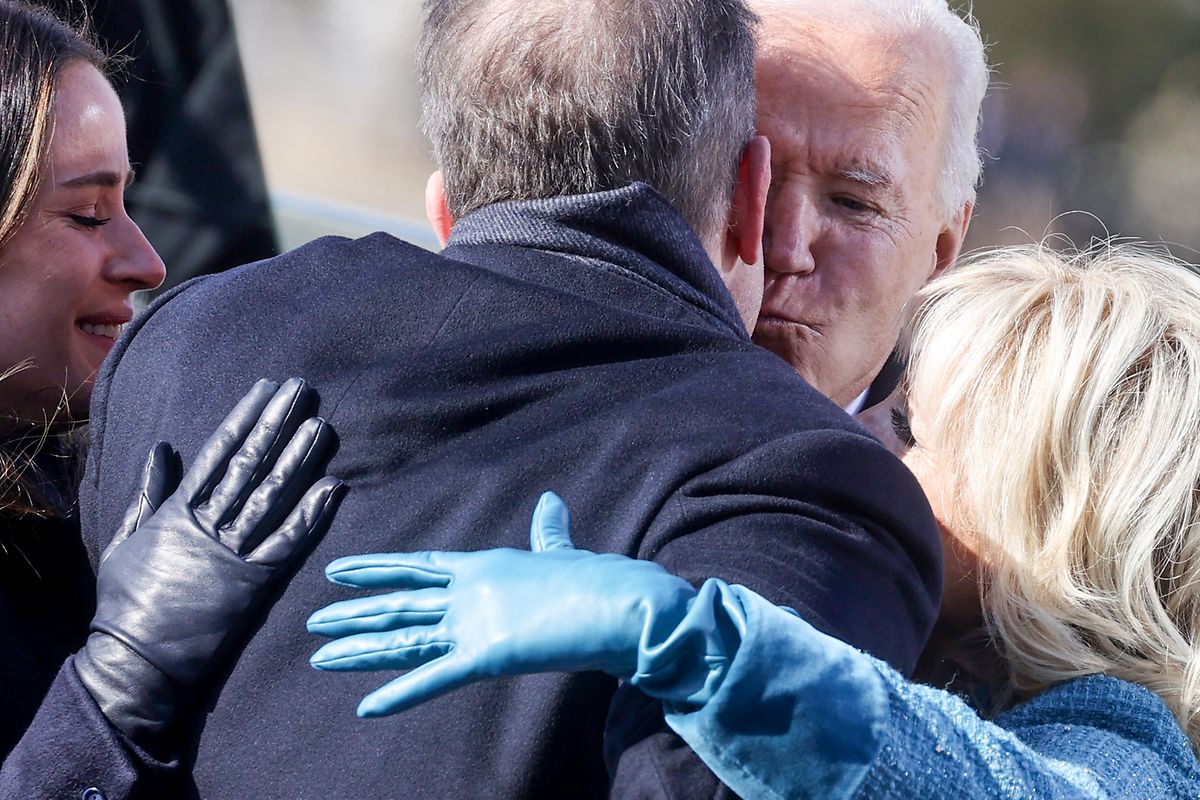 The Democrat takes the presidency after half a century of presence in politics, with the intention of immediately marking the break – in both substance and form – with the former New York businessman. After the ceremony, he went to worship at the Tomb of the Unknown Soldier in Arlington Military Cemetery with former Presidents Barack Obama, George W. Bush and Bill Clinton.

He had also attended a mass in Washington in the morning accompanied by Democratic and Republican leaders of Congress. Joe Biden reiterated his call for unity within the imposing Abraham Lincoln Memorial, a solemn place in the capital, during an evening in honor of his inauguration hosted by actor Tom Hanks who s’ is concluded by a fireworks display.

Joe Biden has promised to reconnect with allies bullied by Donald Trump. “Welcome back” to the Paris climate agreement, French President Emmanuel Macron told him, while German Chancellor Angela Merkel said she was “in haste” to open “a new chapter”. President Biden will have a telephone interview with Canadian Prime Minister Justin Trudeau on Friday for his first exchange with a foreign leader.

In domestic politics, the Democrats intend to take advantage of their takeover of the Senate which became effective Wednesday. The upper house has overwhelmingly confirmed the appointment of former CIA No. 2, Avril Haines, as director of US intelligence.

Would you be ready to roll in pork urine?

Flanders sets out to conquer Brussels

Landing on Mars as if you were there

Contract fulfilled for Zidane and Guardiola
32 mins ago

Contract fulfilled for Zidane and Guardiola

Tales of Love & Adventure: Games with great stories from 1 euro
2 hours ago

Tales of Love & Adventure: Games with great stories from 1 euro