Facebook Twitter LinkedIn Tumblr Pinterest Reddit VKontakte Odnoklassniki Pocket
Anyone who thinks of a clothing manufacturer from Herzogenaurach when they think of “sports brand with three stripes” probably spent their childhood more often on the soccer field than in front of car quartets. To blue, purple and red, to BMW M think the others. As sober as the company name is, so radiant call of this brand in the sports car scene. The dynamic BMW subsidiary turns 50 this year. We congratulate!

The story begins with the 3.0 CSL

“A company is like a person. If they do sport, they are well trained, enthusiastic, more efficient,” said Robert A. Lutz, member of the BMW Board of Management in 1972. BMW has followed this principle since the “New Class” appeared in the 1960s. Works and private drivers nurtured the sporty image of the Munich company, drove a BMW 1800 to 2002 umpteen successes, were present on the racetracks of the world. But so were other brands. And there were many well-motorized cars for the road. On the other hand, if you wanted real sportiness, you had to tune it up (“hairstyle” back then), which was almost common practice in the 70s. 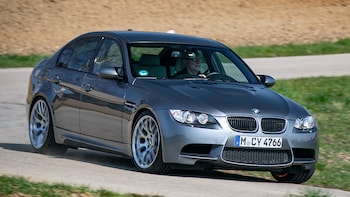 It was the time of bright colors, speed meant skill, speed meant progress. BMW recognized the market, wanted to offer sportiness from the factory and use the appeal of motorsport more effectively for the entire brand. A new, independent subsidiary brand should take care of it, consistently serve the dynamic driving culture and be much more than horsepower ostentation.

BMW was a pioneer in factory tuning

Motorsport GmbH was born. Today, sports divisions of car manufacturers are normal. In the 70s, BMW was a pioneer with its resolute implementation of the factory tuned car – when Audi was still busy surviving and Mercedes was an old man’s event (AMG only came into Daimler hands in 1994).

The M1 remained the only in-house development

Motorsport GmbH (in 1993 it became M GmbH) initially took care of competition engines and vehicles, promotion of juniors and driving courses (“driver school”) for civilian customers. Then the development of road vehicles began, which brought forth the M1 in 1978. M5, M3 followed, after all almost every series had its M spearhead in the 2000s.

The highlights from 50 years of BMW M GmbH

Since the 1980s, many normal BMWs have also had the colorful M on the boot lid – like a medal. M chassis, spoilers or steering wheels provided a pinch of sport even on the 318i off the shelf.

Real M vehicles (own key number in the vehicle registration document), on the other hand, were developed in the M halls (since 1986 in Garching on Daimlerstraße!). And for a long time there was a consistent opinion about how they should be – you could also say attitude. hp were not achieved simply with massive displacement or supercharging, as with others, but with high engine design, fine materials, high-speed concept and delicacies such as individual throttle injection.

With an output of over 100 hp per liter displacement (without turbo!), it had a regular place in the motor Olympus in the 2000s. rear wheel drive was set, the weight was moderate, and the cars, affectionately known as Emmis, were always more dynamic than those of the competition.

With the X5 and X6, M-SUVs were added in 2009, turbos were soon the trend that BMW followed, all wheel drive was offered as an option when the rising torque at the rear wheels could only be controlled by steering wheel acrobats. The pure doctrine of sports car also bowed to the demands of international customers at M. The athletic image of the BMW subsidiary remains.

Formula 1 - rocket attack: That's why there was no boycott