Facebook Twitter LinkedIn Tumblr Pinterest Reddit VKontakte Odnoklassniki Pocket
According to legend, everything we understand today by automotive camping began in 1951. A British officer stationed in Germany knocked at Westfalia in Rheda-Wiedenbrück and had the first camping box built for his Bulli. This resulted in a series-produced combination piece of furniture that was anchored behind the front seats and was easy to install and remove. The bed, stove and sink were quickly on board when needed. The rest is history – almost all other Bulli-campers emerged from this idea. 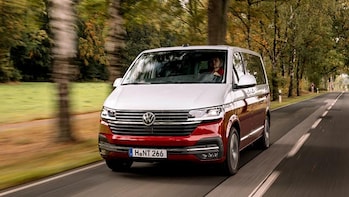 Used VW T6 and T6.1 with warranty – from selected dealers! (in cooperation with HeyCar)

And today? Camping in a motorhome is experiencing the biggest boom ever. Even those for whom vacation has always been a hotel and buffet are now trying it out. It’s also very simple. At least if you already have a Bulli. More and more providers are currently developing minimalist installation solutions with which minibuses and vans, even SUVs or station wagons can be transformed into slimmed-down motorhomes.
Ulrich Vielmetter is one of them. While shopping in the summer of 2010, he had the idea of ​​developing a camping box for the trunk of his Renault Kangoo. A short time later, the prototype is ready and the family goes on vacation to Croatia. The smart part in the rear has proven itself. At home, Vielmetter kept tinkering, adapting the concept to other vehicles and finally getting it patented. Series production has already started and – at least as importantly – a suitable name has been found: Ququq. Vielmetter comes up with this because the cuckoo also lays its eggs in strange nests.

The handling of the Ququq-Box is straightforward

A particularly popular specimen is likely to be the VW Bulli, for sure. The original minibus meter now rolls off the production line as the T6.1, the sixth generation with a facelift. Its most impressive feature: the amount of space it provides in relation to its external dimensions. At just under 4.9 meters, it is much more compact than it looks from inside. This is of course also due to its large windows, which offer the best overview when driving. And beautiful views of nature.

So in with the Ququq box! The end aluminum, waterproof multiplex, steel and stainless steel, which is quite robustly manufactured, has folding handles on the sides, by which two strong men first lift it into the rear (basic weight: approx. 75 kg). Then the securing takes place with the enclosed lashing straps – done. At the selected destination, it is sufficient to fold down the worktop (it hangs horizontally on steel cables) and pull out the stove or cooler via the heavy-duty pull-outs. On the far right there are still sinks and water canisters, there is also storage space for supplies. There is even space for two folding chairs in a deep shaft. Advantage of rear mounting: When it rains, the trunk lid protects against getting wet. In addition, a rear tent from the accessory trade can be installed here if necessary.

If the vehicle is changed, the Ququq-Box simply comes with you

That The fold-out bed is mounted on the top plate of the Ququq-Box. So it doesn’t bother cooking or washing up there. However, he lacks a spring base; the mattress is still surprisingly comfortable. Its three segments are dimensioned so that they can be unfolded in seconds without touching the headliner.

Then it lies down on the folded back rests of the seats or stands on its own legs, for example in a bare transporter. This shows another advantage of this portable solution: If the vehicle is changed, the Ququq-Box can simply be taken with you. Without a bed, so only as a mobile kitchen, the fun starts at 1640 euros. If it can be even more minimalist and a tent is enough for sleeping.

Charging stations for e-cars: a large comparison of search apps

Shortage on the labor market, get used to it

Formula 1: Mercedes called for a new investigation into the World Cup duel