Facebook Twitter LinkedIn Tumblr Pinterest Reddit VKontakte Odnoklassniki Pocket
For a long time, Seat was considered the brand in the Volkswagen Group that simply couldn’t celebrate any successes in this country. But that changed fundamentally with the introduction of the first SUV, the Ateca. Together with the sporty sub-brand Cupra, the Ateca is one of the Spaniards’ guarantee of success. The high level of popularity in recent years also offers bargain hunters a good chance of getting a cheap SUV.
There are numerous copies of the spacious Spaniards on the used car market that are in excellent condition. There are also motorizations that have already been discontinued but are extremely interesting. Just like this example. 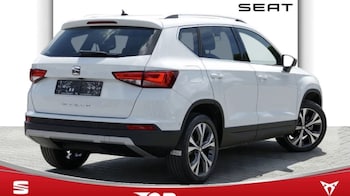 The Seat Ateca 1.6 TDI drives up with a 115 hp four-cylinder diesel, which sends its maximum power of 250 Newton meters to the front wheels either via a six-speed switch or a seven-speed DSG. The example offered here was ordered in the highest equipment version Xcellence for this motorization in connection with the automatic. The only previous owner to date was therefore able to enjoy numerous safety and comfort features such as a reversing camera, full LED headlights, sports comfort seats with Alcantara seat centers and of course a navigation system.

Not only the high level of equipment of the Seat Ateca indicates that the former buyer appreciated his vehicle and therefore treated it with care. This is also revealed by a look at the interior. In view of the relatively low mileage of just 14,733 kilometers, the very good condition is no wonder.

The Seat Ateca 1.6 TDI Xcellence, which was registered in February 2020, is currently being offered by “Autohaus Bellendorf GmbH” in Bottrop for 23,790 euros. A look at the price list from 2020 shows that this is a real bargain. At that time, the Ateca 1.6 TDI with this equipment cost at least 33,180 euros and thus almost 10,000 euros more than today.

LG unveils largest OLED TV of all time - it's that huge