Facebook Twitter LinkedIn Tumblr Pinterest Reddit VKontakte Odnoklassniki Pocket
For around 18 years, BMW has been trying to put the perfect all-rounder on wheels with the X3. Not too big, but spacious; with powerful engines, but still economical. How versatile the 4.71 meter long SUV is can be seen from the current, third generation with the internal abbreviation G01. It is available both with conventional combustion engines and in a plug-in hybrid version, and the M offshoot also ensures maximum sportiness. Most recently, the G01 served as the basis for the fully electric iX3. The output range of the SUV ranges from 184 to 510 hp. Thanks to the facelift that was only a few weeks old, the BMW X3 looks ultra-modern, and this also applies to the interior. The only catch of the otherwise coherent overall package is the relatively high price. According to the list, you have to invest at least 51,100 euros for the entry-level model, the X3 xDrive20i. But if you choose the right model and the right provider, you can save a lot: At carwow.de there is the BMW X3 xDrive30e with a discount of up to 16,349 euros. The purchase premium for plug-in hybrid cars is already taken into account here. (As of October 10, 2021). 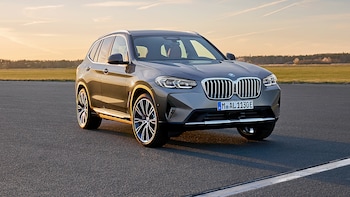 In contrast to other carwow.de offers, with the BMW X3 you don’t have to go for the most powerful and most expensive model to get the maximum discount. The best offers are for the most economical version of the Bavarian SUV in conjunction with the M Sport package, which costs 4500 euros. The X3 xDrive30e plug-in hybrid model combines a two-liter, four-cylinder petrol engine with an 80 kW electric motor and, with fully charged batteries, achieves a range of up to 50 kilometers without using the combustion engine. The system output of at least 292 hp, together with the torque of 420 Newton meters, is easily enough to accelerate the two-ton SUV to 100 km / h in 6.1 seconds. The lavish standard equipment is just as impressive. In addition to LED headlights and an electric tailgate, X3 buyers can also look forward to sports seats and the fully digital BMW Live Cockpit Plus. A look at the configurator reveals, however: as xDrive30e with M. BMW usually calls for a sports package of 64,800 euros. At carwow.de, the offers start at 49,346 euros and thus 15,454 euros below the recommended retail price. The environmental bonus is already taken into account in this price. With a few extras on board the sporty hybrid SUV, the maximum discount of 16,349 euros is possible. But be careful: Because of the transport costs, the discount will be slightly reduced.

BMW X3 as a combustion engine over 10,000 euros cheaper

But a plug-in hybrid car does not necessarily suit every driver and every driving profile. It is all the more gratifying that carwow.de does not neglect fans of the classic combustion engine either. It doesn’t matter whether you prefer to drive a diesel or a gasoline engine. This is how you get the 360 ​​hp M Performance model M40i without negotiation a discount of at least 11,658 euros. The three-liter six-cylinder diesel also manages a five-figure discount with the M sports package. Instead of the list price of 65,100 euros carwow.de offers for the X3 xDrive30d start at 54,857 euros. With a discount of almost 16 percent, you can also cope with the fact that – as with the plug-in hybrid – the transportation costs eat up a small part of the savings. (Here are important tips for buying a new car on the Internet!)

Learn to invest with the RTL Z Stock Game

The best mouse and keyboard tools

Price: Why used e-cars are cheap in the long run

The T-Roc Facelift (2021) brings more quality to the crossover