Facebook Twitter LinkedIn Tumblr Pinterest Reddit VKontakte Odnoklassniki Pocket
An important cornerstone for the success of the Kia brand in Europe was laid by the compact car called cee’d at the time. Above all, the good price-performance ratio compared to established sizes in the segment helped the cee’d to grow in popularity. Around 15 years after the start of the series in Europe, a lot has changed. Not only has the name been simplified, the Ceed has long been part of the establishment of the European market. It now serves as the basis for several offshoots such as a station wagon, the Crossover XCeed or the Shooting Brake ProCeed. But the third generation of the original Ceed also manages to combine the basic values ​​of the series with a modern appearance. The sporty GT and GT Line versions have been particularly popular for a number of years. But thanks to the wide range of drive variants and the power range between 100 and 204 hp, everyone should find a Ceed version that meets their own requirements. Provided, of course, that the just under 4.30 meters of the newly launched Kia does not collide with family planning. In order to become part of the still growing Ceed community, you have to have at least 19,190 euros ready according to the RRP. But you can still save a lot of money with the right provider. At carwow.de there is the Kia Ceed up to 7112 euros below the list price (As of October 24, 2021). 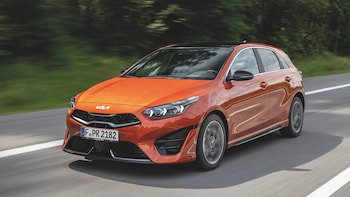 Who it is on the maximum discount apart from that, you don’t have to go for the GT right away, but it works the highest equipment variant Platinum not over. If you combine this with the 136 hp 1.6 CRDi diesel with 48-volt mild hybrid technology and the dual clutch transmission, high discounts await. And that without having to forego comfort. As a diesel platinum, the Ceed rolls off the assembly line with, among other things, black leather covers, six airbags, numerous assistance systems and heated and ventilated front seats. You can also look forward to a navigation system with a large touchscreen and modern infotainment functions. The recommended retail price of the Koreans for the Kia Ceed 1.6 CRDi EcoDynamics + with 136 PS and DCT is 35,560 euros. At carwow.de, the offers for the lavishly equipped Diesel Ceed start at 29,338 euros. That corresponds to a discount of 6222 euros. If you book a few extras like the 990 Euro glass roof, you can bring the discount to the maximum 7112 Euro. (Attention: the transfer costs reduce the discount by a few hundred euros).

As already mentioned, the top version GT is one of the most popular models in the compact series. On the one hand, this is due to the resharpened look, and on the other hand to the 1.6-liter heart of the Korean. The four-cylinder turbo gasoline engine provides 204 hp, which are directed towards the asphalt via a seven-speed dual clutch transmission. Shift paddles on the sports steering wheel give the pilot the opportunity to become active himself and to shift gears manually. The driving values ​​are also impressive. The Ceed GT accelerates to 100 km / h in 7.5 seconds, with a maximum of 230 km / h. In other words, exactly the ingredients that ensure fun in the compact segment. According to the price list, Kia is calling at least 33,130 euros for the Ceed GT. At carwow.de the top model of the Kia Ceed is currently available from 27,394 euros and thus 5736 euros below the RRP. In view of the high fuel prices, the money can be put to good use when visiting the gas pump. Attention: Here, too, the transfer costs reduce the discount by a few hundred euros in the end. (Here are important tips for buying a new car on the Internet!)