Facebook Twitter LinkedIn Tumblr Pinterest Reddit VKontakte Odnoklassniki Pocket
Powerful engines, rear-wheel drive and great handling – this is what BMW is known for and appreciated around the world. The headwinds from the fan base in 1999 were correspondingly large when the Munich-based company presented the brand’s first SUV, the X5. Because at first glance, the misshapen, large model did not correspond at all to the self-imposed philosophy. From today’s perspective, BMW did everything right and is still benefiting from the ongoing SUV boom. The fourth generation of the X5 with the internal code G05 is no longer the largest model in the growing X family, but it is still one of the most popular. The reason for this is the successful mix of driving comfort, performance and the versatile engine program. The fact that the X5 is still considered a luxury SUV can be seen in the configurator or car dealership at the latest. Because according to the price list you have to at least 70,950 euros invest in order to be able to order the Munich. Fortunately, there are currently lavish discounts at carwow.de: The BMW X5 is currently being offered at a discount of up to 18,506 euros (As of December 29, 2021). The purchase premium for electric cars and plug-in hybrids is already included. (Here you can find all information about buying a new car on the Internet!) 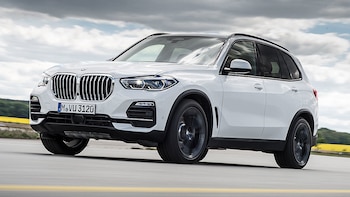 To get the full discount, you should at least not be an opponent of electrification. Because the biggest discounts are available at carwow.de on the Plug-in hybrid version X5 xDrive45e in the highest equipment variant M Sport. Fortunately, you don’t have to do without the typical BMW in-line six-cylinder with this model, but rather enjoy the fact that it is supported by an electric motor. Together, the turbo gasoline engine and the electric unit create a system output of an impressive 394 hp and a torque of 600 Nm. As the type designation suggests, the 45e also has the xDrive all-wheel-drive system. As M Sport, 20-inch alloy wheels, a particularly sporty design of the aprons and sporty interior details are part of the standard equipment of the X5. The combination of plug-in hybrid and version M Sport costs according to the list at least 83,500 euros. At carwow.de prices start at 65,884 euros. That corresponds to a discount of 17,616 euros or 21 percent. The purchase premium for plug-in hybrids has already been taken into account. In order to get the maximum discount of over 18,500 euros, you have to give the X5 a few additional extras (be careful, the transfer costs reduce the discount by a few hundred euros).

Diesel with a discount of almost 12,000 euros

If you can’t do anything with the plug-in hybrid, you will certainly find another model at carwow.de that better suits your own preferences. With SUVs as large as the X5, diesels are still very popular, especially when it’s BMW’s six-cylinder diesel. There is such a thing, for example, with the xDrive30d. The diesel generates 286 hp and 650 Newton meters from three liters of displacement, and the eight-speed automatic transmission is standard. In order to use these values ​​next to the road (and that is what SUVs were once intended for), it is worth reaching for the somewhat more robust xLine. Instead of the actually estimated 78,100 euros for the X5 xDrive30d xLine, only 66,294 euros are due at carwow.de. At a Discount of 11,806 euros It doesn’t matter that the transfer costs reduce the actual discount by a few hundred euros.

Lease the compact crossover Ford Puma for 189 euros a month