Facebook Twitter LinkedIn Tumblr Pinterest Reddit VKontakte Odnoklassniki Pocket
It has now been over five years since the Kodiaq kicked off the SUV offensive was presented by Skoda. While Karoq, Kamiq and the fully electric Enyaq model have now rounded off the SUV range, Skoda was working on a comprehensive facelift for the largest SUV, the Kodiaq. The most powerful model in the series, the Kodiaq RS, also benefits from this. However, not only the look and numerous details in the interior of the sporty SUV have changed – a lot has also happened under the bonnet. Because while the Kodiaq RS was still debuting as a diesel (and was also extremely successful with the 2.0 TDI), now one takes care of it 245 hp turbo gasoline engine for propulsion, which among other things also fuels the VW Golf GTI. When it comes to the transmission, Skoda remains as true to itself as it does when it comes to the powertrain: it belongs to the Kodiaq RS Seven-speed dual clutch transmission as well as the series as the all wheel drive. While the revised Skoda Kodiaq starts at around 30,000 euros, you have to lie down a little more for the petrol powerhouse: the 245 PS Kodiaq costs at least 49,720 euros according to the price list. Although Skoda has only recently modernized the SUV, you can already save a lot with the Kodiaq RS. With the right provider, discounts between 8100 and 8950 euros are possible (As of December 26, 2021). That corresponds to a discount of at least 16 percent. (Here you can find all information about buying a new car on the Internet!) 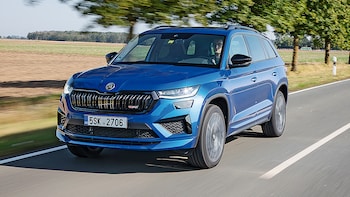 Skoda fans are not faced with major decisions when ordering the new Kodiaq RS. After all, the most powerful model in the series is rolling always available as a 2.0 TSI with dual clutch transmission, all-wheel drive and an impressive 245 hp. In terms of equipment, many questions have already been answered. In addition to sportier aprons, 20-inch alloy wheels and blackened decorative elements, the RS also includes the most striking new feature in the interior as standard: the digital cockpit is equipped with an additional display mode that focuses on the rev counter and speedometer.

Skoda Kodiaq RS up to 8950 euros below list price

As usual with Skoda, the top model can also be spruced up with a variety of optional extras. These include, among other things, an auxiliary heater, an electric panoramic sliding roof and a trailer hitch. In the production version, the Skoda Kodiaq RS costs at least 49,720 euros according to the RRP. At carwow.de, the prices for the 245 hp SUV start at 41,620 euros – and thus 8100 euros under the list. A maximum of a discount of up to 8950 euros is possible (be careful, the transfer costs reduce the discount by a few hundred euros).

Top flops in IT: the 13 most short-lived products