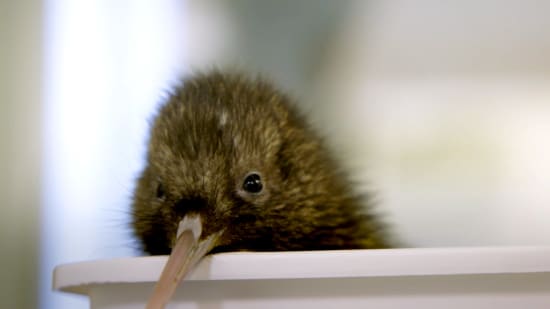 The kiwi is our national icon but few New Zealanders have seen one, and even fewer have observed one in the wild. That hasn’t stopped us being fascinated by this unique and mysterious bird and investing in its survival.

They are the most unlikely icon for a nation: flightless, vulnerable, fluffy birds with terrible eyesight and nostrils prone to blocking. However, the kiwi is an undeniably fascinating creature, and an endearing one which has captured the hearts of many.

This may partly account for the massive amounts of effort going into helping our kiwi breed and stay alive. According to Nathan Hawke, marketing manager at Orana Wildlife Park in Christchurch, the birds have an air of mystery about them because, being nocturnal, they’re not often seen in the wild.

“If you asked New Zealanders who’d seen a kiwi in the wild, I’d bet not many,” Hawke tells Frank Film. Whether seen in captivity or glimpsed in the wild, their trademark physiology is remarkable – round and fluffy, with a backside akin to a miniature woolly mammoth, and a very long beak.

According to Laurie Keller, wildlife husbandry manager at the West Coast Wildlife Center in Franz Joseph, while their eyesight is terrible, their sense of smell and hearing are both sharp. “Kiwi can actually live for a very long time,” she tells Frank Film. Free from predation they are thought to get to around 50, 60 or 70 years of age.

Paul Scofield, senior curator of natural history at Canterbury Museum, is equally fascinated by kiwi. “Their feathers have been modified into whiskers,” Paul tells Frank Film, but he explains that the feature he finds strangest is the way their nostrils are all the way at the end of their long beak.

They use their beak to dig around for bugs, leading to the obvious problem of blocked nostrils that need to be cleared. “If you’re in the forest at night, you can actually hear them exhaling through their nostrils,” he says. He also points out the irony of the flightless kiwi being the emblem for the air force.

So why do kiwis need so much protection? According to Catherine Roughton, manager New Zealand Native Fauna at Orana Park, it’s the young kiwi defenselessness that’s the problem.

“Their chicks are incredibly independent from a young age, but they lack a lot of defenses against some of our introduced mammalian predators, such as stoats.

“They also lack the breastbone and breast muscle that a lot of birds have,” she says, and explaining that this makes predators like dogs very dangerous. A dog just has to pick a kiwi up and it’ll likely die from crush injuries to the chest.

Over at Franz Joseph, the center hatches hundreds of kiwi. They have a big job to do – roughly 95 percent of kiwi hatched in the wild will die with no intervention. So, Keller says, the best way of supporting kiwi is to raise them to be large enough and heavy enough so that when they’re returned to the wild, they’re too big and strong for stoats.

The center is engaged in a public-private partnership with the Department of Conservation (DoC), which keeps an eye on breeding pairs. DoC gives the go ahead when it’s the right time to collect an incubated egg (which, size-wise, gives your standard chicken’s egg a run for its money).

Chicks hatch pretty well-developed, with fully-formed feathers and capable legs. “Once they’re hatched, they also don’t need mum and dad because they’ve got a huge belly full of yolk that supplies them for about 10 days,” explains Laurie.

The center is currently raising two kiwi chicks: a Rowi and a Haast Tokoeka. There are five species of kiwi across New Zealand: the Little Spotted Kiwi (Kiwi Pukupuku), the Ȱkārito Rowi, the North Island Brown Kiwi, the South Island Tokoeka and the Great Spotted Brown (Roroa).

The Tokoeka population is sitting at around 450, and the center has hatched around 130 of those over its 11 years in operation. The Rowi population, meanwhile, sits at around 600, with the center having hatched half of these. When they’re large and heavy enough, the hatched kiwi are released into the wild.