Adieu: This semi-integrated is saying goodbye as a long-term tester

The first long-term test car at AUTO BILD REISEMOBIL with the Ford Transit as the basis has made it! After a very special year, it’s time to take stock.

D.as does not happen again. So a year like 2020, we think. Hopefully! What did we not have in mind with our beautiful new endurance test car! We wanted him to show us his home in the south of France (he rolled off the line in Tournon-sur-Rhône, about 80 kilometers south of Lyon). Explore your transport capacities with boxes of Côtes-du-Rhône wines. Finally leave France behind us on narrow Pyrenean roads and just keep following the sun. Alone – it shouldn’t be. At least not like that, because in the anniversary year of Chausson (it celebrated its 40th birthday with a fully equipped special model, our 627GA) something invisible came up.

Of the Ford Transit has proven itself as a base vehicle 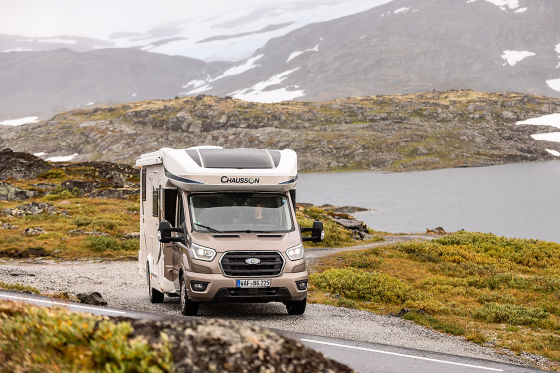 Impeccable handling and a comfortable set-up made even long tours a pleasure.

You, dear readers, of course know at least as well as we do what it is about. Eventually most of them had to change their tour plans. But: Like everyone else, we made the best of it, drove off with the motorhome when we were allowed to and wherever we could. This is how this logbook has become nicely full. What we read in it again and again: How spacious and comfortable the Chausson construction is how pleasant the bright colors and plush upholstery are. And: How good the Ford Transit does as a base vehicle! At Chausson he poses the alternative to the Ducato for many layouts . Our anniversary model was even with the powerful 170 hp machine and the six-speed automatic converter equipped, which received a lot of praise for its comfort-conscious nature. As the gently tuned chassis, which also cushioned rough bumps in the road with ease. The fact that it was always safe and easily controllable was also due to the lightning-fast ESP and the stable brakes. They fell annoyingly while driving strong wind noise from the panoramic skylight on, increasing Crackling noises Likewise. In addition, the range was only around 500 kilometers. “Longitudinal adjustment is cumbersome when the seats are rotated,” wrote AUTO BILD colleague Matthias Moetsch in the logbook – true, because the handle for it always stayed in front. Despite the height adjustment, they also did not reach the level of the adjacent benches. Practical here: the self-resetting handbrake lever.

The kitchen was convincing across the board 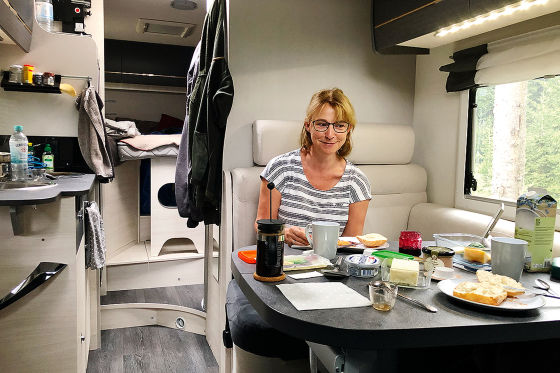 Every meal tastes even better at the large folding table.

A special feature in the cozy L-shaped seating area was that optional fifth seat (440 euros), which could be set up against the direction of travel by means of an insertable backrest behind the front passenger seat. The stable one The folding table was height adjustable and rotatable. That hung on it electrically lowering and lowering bed (800 euros). With insertable fall protection on both sides and the sturdy hanging ladder, it was also suitable for children. However, when it was lowered, it partially blocked the main building door. This appealed to us with its central locking, but was irritating with the fact that the lid of the integrated rubbish bin did not open completely to 90 degrees. This made it difficult to remove full garbage bags. With three spacious drawers, under and overhead cupboards as well as a large sink and piezo-ignited three-burner stove however, knew how to convince the kitchen. There was also a fold-out work surface extension. This was followed by the AES fridge-freezer combination. She responded sensitive to inclination; an annoying beeping then called for the use of a spirit level and drive-up wedges. A TV can be installed above this, the connections of which (such as those for a solar system) are already pre-installed.

The cloth always had to be used after showering Spacious, easy-care bathroom with plenty of storage space in the mirror cabinet.

Opposite was the bathroom. It impressed with plenty of space, a spacious sliding-door mirror cabinet and, thanks to the membrane pump, powerful water pressure from the shower. However, a rag always had to be used after splashing around – the doors did not close flush with the floor away. They proved to be extremely convenient Single beds in the rear. There were two wardrobes at the foot of the bed, and a pull-out with an integrated step could be used to create a beautiful lawn for sunbathing. The conclusion was a generous rear storage space, which had to be loaded via two external flaps as standard. Great here: the flush locking handles.

With so many qualities, it was all the more surprising that one insufficiently fastened step cover between the front seats or carelessly applied sealant wanted to tarnish the overall impression on the frame of the body door. Even the loose cable connections on a distribution rail, which made for a visit to the workshop, shouldn’t have been. Apart from that, some special features testified to the demands of the designers. As the 4 kW diesel heater that could also be operated while driving, the thick wall structure, which is made entirely of GRP on the outside, or the practical service box, in which the electrics and water tank are housed separately from each other.

Conclusion: It is always worth trying something new: The Ford Transit was convincing as a comfortable, easy-to-use basic vehicle. In terms of engine power, its consumption was also okay, there are plenty of shelves in the dashboard and a perfect overview thanks to large windows and mirrors. Apart from the weaknesses mentioned in detail, the structure also offers a lot of comfort – especially in terms of design, storage space and freedom of movement. AUTO BILD REISEMOBIL judgment: 3.5 out of five.