Another 26 child seats in the ADAC test: five seats fail

The ADAC tested child seats again in 2021. A total of 52 models had to prove themselves on the test bench. Most of them were convincing, but some child seats failed.

D.he second half of the ADAC child seat test 2021 is here: 26 additional seats for different weight and size classes have been put under the microscope by the automobile club. In the spring edition of the test, 26 child seats were already tested. At that time, five child seats were rated “poor”. and five candidates fail again in the second half of the test: The Osann Oreo 360 II does not pass the pollutant test and is rated “unsatisfactory”; The thyroid-damaging plasticizer DHP was found. In addition, four child seats are rated “sufficient”.

ADAC test: child seats that grow with the child are not recommended

The models rated “sufficient” are so-called child seats that grow with the child and can be used from birth to 12 years of age. So there is only one seat for the entire period of use. But the testers point out that this type of car seat is always a compromise which ultimately affects safety and operation. The ADAC and AUTO BILD generally recommend the use of three child seats: a baby seat for the newborn, then a matching, ideally rearward-facing, follow-up seat and then a group 2/3 child seat with a backrest. Because the better the seat is tailored to the respective child’s age, the better the fit and safety.

That The Mima iZi Go Modular i-Size + iZi Modular i-Size Base baby seat gave the best result in the child seat test. It received a rating of “good” (1.7), but with a price of 555 euros it was also one of the most expensive seats in the test. Overall, cut from the tested seats in the second test phase in 2021 14 models rated “good” and seven others rated “satisfactory”As in the first half of the test in May, no child seat was able to secure the top grade “very good”. At that time, 18 candidates received the grade “good”, and three other models received the grade “satisfactory”. The seats tested was the Chicco Kiros i-Size + Kiros i-Size Base child seat, which failed in the crash test: the baby seat detached from the base in a frontal impact, so the baby seat was downgraded to four seats rated “poor” failed in the pollutant values. In the Besafe iZi Go Modular X1 i-Size (with and without iZi Modular i-Size Base) and the Swandoo Marie 2, the ADAC found naphthalene, which is said to be carcinogenic. The plasticizer DPHP was found in the Osann Oreo 360, which is said to have an adverse effect on the thyroid function and hormonal balance of children. Osann (exchange of the polluted shoulder pads) and Swandoo (exchange of the contaminated seat covers) offer a repair.
Baby seats achieved the best test results: Four models were able to secure a “good” rating of 1.7: Babyzen Yoyo iZi Go Modular X1 i-Size by Besafe + iZi Modular i-Size base, Maxi-Cosi Tinca + Tinca Base, Peg Perego Primo Viaggio Lounge + i-Size base, Silver Cross Simplicity Plus + Simplifix Isofix base, Stokke iZi Go Modular X1 i-Size by Besafe + iZi Modular i-Size base. The Cybex Solution S i-Fix and Joie i-Traver seats, which are suitable for children from around four years of age, were also rated “good” (1.8). 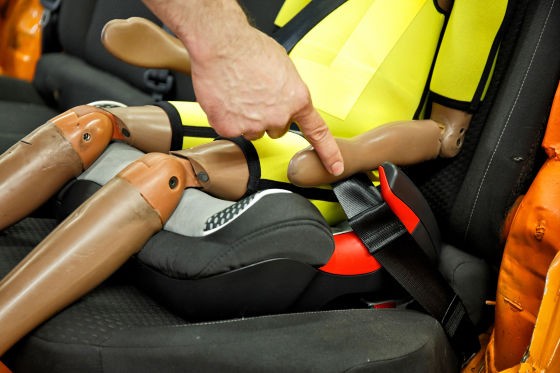 In addition to the classic child seats, booster seats were also examined carefully during the test in May. The seat shells had to pass the same test as the other test candidates. The result: all poor. No wonder, because side impact protection and headrest are not provided here. Nevertheless, the booster seats can be used for children weighing 22 kg or more or 1.25 meters tall (models purchased before 2017 starting at 15 kg). Nevertheless, they should rather represent an emergency solution, because they cannot replace a fully-fledged child seat.

This is how the ADAC tests child seats

The child seats are examined in the test disciplines of safety, operation, ergonomics, pollutant content and processing / cleaning. The automobile club sometimes applies stricter criteria than the legislature. For the safety test, a frontal impact (64 km / h) and a side impact (50 km / h) are simulated with dummies. During the pollutant test, the seat covers in particular are checked for the content of harmful substances. (Read more about the ADAC child seat test here.)

All results at a glance

ABP pension fund is exiting fossil fuels: what are the consequences?