Cupra’s first independent model, the Formentor is here! The crossover is named after a peninsula on Mallorca and visually stands out clearly from its brand brothers. Under the sheet metal is corporate technology from VW. Now that too is limited to just 7000 pieces Top model VZ5 can be ordered at prices from 61,650 euros. The market launch is at the end of November 2021. The other models are already available from dealers. The pure combustion engines start at 32,600 euros. The Plug-in hybrid is there away 40,780 euros.

Limited VZ5 with five-cylinder and 390 hp

With the five-cylinder from the Audi RS Q3 brings in limited to 7000 pieces Top model of the Formentor, the VZ5. The 2.5 liter TSI brings it up 390 hp and 480 Nm. Seven-speed DSG and all-wheel drive are standard. Equipped in this way, the lighter Formentor even overtakes the RS Q3 in the standard sprint despite ten horsepower less. It is 0.3 seconds faster from 0 to 100 km / h and can do it in 4.2 seconds. The strongest distinguishing feature are that special tailpipes. They are arranged diagonally one above the other in the rear apron on both sides. All information about the Formentor top model can be found here.

Formentor is close to the study

The design of the Cupra Formentor has actually been known since the beginning of 2019 – at that time the Spanish brand showed a near-series study. The design promise from back then was followed by deeds, because the Formentor only differs from the concept car in detail. The front remains aggressive and rugged. In contrast to the Leon, the new Cupra has round fog lights in the front apron. In the profile, the first thing you notice is the sloping rear, the beefy rear fender and the 19-inch wheels that are standard on the stronger VZ. The wheels house an 18-inch Brembo brake system with perforated brake discs on the front axle. The rims can be worn on request copper-colored accents – typical Cupra. That too Rear largely corresponds to the design of the study, with the exception of small changes to the roof edge spoiler and a less brutal diffuser insert. The continuous strip of lights is retained, as are the four exhaust trims.

Although the Formentor is a crossover, the dimensions remain quite sporty. Since the Formentor should be moved in everyday life, the trunk volume also plays a role. Here Cupra specifies a volume of at least 450 liters with the rear seat bench upright. If you fold it down, it will be 1475 liters.

The dimensions at a glance:

Interior known from the Leon

The interior has also been known since the conception of the study, and it is also very similar to the interior of the Cupra Leon. Seated in the crossover Sports seats with copper-colored decorative stitching. The sports steering wheel has satellite buttons: they are used to start the engine and change the driving mode. As in the Leon it measures Digital cockpit 10.25 in. That infotainment is about one up to twelve inch touchscreen served. It sits horizontally on the dashboard and is larger than the screen in the Cupra Leon. The air vents and steering wheel clasp have copper-colored decorations.

Great driving dynamics, but a tendency to understeer

AUTO BILD drove the Cupra Formentor VZ at the Lausitzring. The 310 hp SUV clearly benefits from the MQB platform of the VW group. From the polo to the superb, everything has to fit, which is why sports models based on this are always a compromise. The advantage: Such an MQB athlete doesn’t drive like a sack of nuts even in the comfort setting. The spread tends towards everyday life with possible outliers upwards.

Sitting position and brakes are not noticed positively

The chairs don’t offer a lot of lateral support, but they are very comfortable. However, the Cupra displeases his sitting position too high. Yes, we know: this is an SUV, that’s how it should be. But we also know that this does not have to be the case with a sports SUV. And the sporty Brembo system (2400 euros surcharge) unfortunately does not attract attention. After three fast laps, the Italian stoppers gave smoke signals despite the cooling lap. The embossed Audi logo on the wheel hub proves that the brake is also part of the corporate shelf. One or two Audi test cars also had their thermal problems when decelerating.

For safety reasons with a tendency to understeer

On the fast lap, the Cupra also shows us one unsightly tendency to understeer. This is due to the idea of ​​safety, because it is easier to control, but it is less fun than a rear that is easy to steer. Finally: Of course, such a Formentor VZ will rarely be found on the racetrack. But what applies here also applies on the country road.

The Cupra wins the comparison test against the BMW X2 M35i 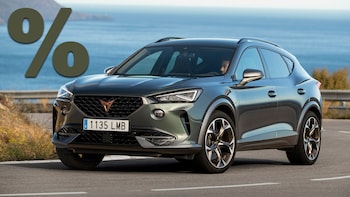 At carwow.de there are inexpensive new cars, including many Cupra models such as the Formentor.

Even in the base, the Formentor is by no means poorly equipped. For sporty cornering behavior Dampers adjustable via DCC and a Progressive steering care for. In addition to classic navigation, infotainment also offers the option of wirelessly connecting telephones via Apple CarPlay and Android Auto. In addition to touch, infotainment can also be controlled using voice and gestures. Buyers have ample freedom of choice when it comes to the color design of the Formentor. Nine paint jobs are available for the crossover, including two matt colors.

A 1.5 liter gasoline engine with 150 hp, which is optionally coupled to a six-speed gearshift or a seven-speed DSG. This is followed by a two-liter petrol engine in three output levels with 190, 245 or 310 hp. Shifting is always done by the automatic, only the middle variant has no all-wheel drive. In the meantime there is also a diesel. The two-liter TDI develops 150 hp and 340 Nm, is shifted through six gears or changes gears automatically thanks to the seven-speed DSG. Another option is there Plug-in hybrid drive for the Spaniard. It’s called e-Hybrid. Here the crossover in the Cupra Leon makes use of the combination of a 1.4-liter TSI and an electric motor. The whole thing is offered in two variants with 204 or 245 HP system output. Together, 245 HP system output are generated here. The fully electric range varies depending on the strength of the engine: the weaker version can travel up to 54 kilometers, the more powerful up to 54 kilometers. That strongest model is the limited Formentor VZ5 with five-cylinder and 390 hp (more on this in the chapter on the VZ5).

The first used Formentor can already be found in the AUTO BILD used car market. Prices start there for less than 30,000 euros for the 150 hp entry-level engine. As a rule, the cars have hardly been moved. The more powerful VZ with 310 hp can also be found here, used cars are available from 36,000 euros. Most of the vehicles on offer have less than 10,000 kilometers of mileage.

After escaping from the police: Raser has to sell his car