Vans and station wagons are on the way down on the scale of buyers’ favor. SUVs and crossovers are very popular. Dacia notices that too, which is why Lodgy and Logan MCV will be united in a model called Jogger in the future. With up to seven seats, it should combine the space of a van with the versatility of a station wagon and the suitability for bad roads of an SUV. Why jogger? The name is intended to symbolize the brand’s connection to the outdoors. Building on the CMF-B platform, on which Renault Clio and Dacia Sandero are also located, the jogger takes over a lot of their technology. The brand’s first hybrid drive will be a highlight, albeit only around a year later Market launch in March 2022 will be available. For the time being, only a gasoline engine and a gas engine are available. The jogger is expected to be available for order from December 2021, prices start at 13,990 euros for the five-seater, the variant with seven seats is available from 14,790 euros.

Equipment and prices at a glance: 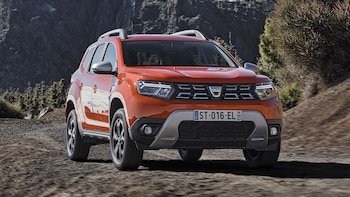 At carwow.de there are inexpensive new cars, including many Dacia models.

On the front, the optics do not offer any surprises. The whole Front end is known from the Sandero Stepway, included LED headlights, plastic-covered wheel arches and aprons as well as the indicated underrun protection. In front of the B-pillar, the roof line rises four cm to give the rear passengers easier access. Depending on the equipment, there is one on the roof variable roof rails with 80 kg load capacity. The struts are removable and can be mounted transversely as a roof rack. The boxy rear with its vertical lights is reminiscent of a mixture of a Volvo and a VW Caddy. in the Trunk find in Five-seater between 565 liters and 1819 liters Luggage space. At the Seven seater it depends on the seat configuration 160 liters, 708 liters or 1819 liters. The loading sill is comfortably low at 66.1 centimeters. There are also hooks, lashing eyes and straps in the storage space to secure the load.

Cockpit from the Dacia Sandero

That The cockpit was almost unchanged from the Sandero taken over, only the somewhat more generous space is new. The many shelves and the height and depth adjustable steering wheel are practical. The Dacia-typical soft seats could probably lack support on long journeys. In terms of equipment, an on-board computer, cruise control and six airbags are standard on board. Options include heated seats, automatic air conditioning, Keyless Go, rain sensor, PDC with reversing camera and an electric parking brake.

They are interesting three infotainment solutions. In the base there is a holder for the smartphone, which can be used for infotainment with the free Dacia app. Applications can be loaded and arranged as desired. The system is controlled either via the steering wheel buttons or the smartphone’s own operation. Two infotainment variants with an eight-inch touchscreen are optionally available, with the highest level of navigation and wireless smartphone connection.

Plenty of space in rows two and three

In Row two it sits comfortably. Except for the optional folding tables and a twelve-volt socket, things are sparse, However, the feeling of space and space are excellent. Amazingly, this also applies in Row three. Even adults up to 1.85 meters tall have enough headroom and their knees do not hit the front seat backrests. The boarding is also easy thanks to the simple folding mechanisms of the seats.

On the engine side, there will be two one-liter three-cylinder engines at the market launch. Of the newly developed gasoline engine produces 110 hp and brings 200 Nm of torque while the LPG engine to 100 HP brings. Thanks to the 50-liter petrol and 40-liter gas tank, his Total range at over 1000 kilometers lie. Both units are linked to a six-speed manual transmission and drive the front wheels. All-wheel drive is also not available for an extra charge. So that the crossover still lives up to its name, there is 20 centimeters of ground clearance.

Hybrid from the Renault Clio

The big innovation in the engine range concerns the Full hybrid. It comes from the Renault Clio E-Tech and, according to Dacia, was taken over unchanged. That means: 140 HP system output from a combination of a 1.6-liter gasoline engine and an electric motor. With the 1.2 kWh battery should In city traffic 80 percent of the distances are covered electrically can be. Unfortunately the engine won’t be available until 2023. When asked about the reason for the delay, it was said that they did not want to attack customers with such an innovation. You first have to get used to the idea that a hybrid replaces diesel. Because there will no longer be a diesel engine.