Facebook Twitter LinkedIn Tumblr Pinterest Reddit VKontakte Odnoklassniki Pocket
Mercedes discontinues the A-Class! The last compact Mercedes is scheduled to roll off the assembly line in 2025. According to the “Handelsblatt”, the B-Class will then also be phased out. It can’t be due to its success: the compacts accounted for around 17 percent of all Mercedes sales in 2021, and 323,000 of the compacts with the star were sold worldwide. For comparison: VW sold around 268,000 Golfs in the same year.
But although the compact class is worthwhile for Mercedes, the A and B classes are now being discontinued. Is Mercedes tired of the small cars? On the contrary: “There will also be compact entry-level models from Mercedes-Benz in the future,” explains a Mercedes spokesman to How To Cars. In fact, the group has big plans even in this relatively small size class.

Also in the future compact cars

A few weeks ago, the Mercedes Vision EQXX offered a foretaste – a concept car, of course. But one that made headlines around the world. Because the car, which drove more than 1200 km at an average speed of 87 km/h without recharging, has a battery that is lighter than any that have existed before. Consumption under 10 kWh. And: The battery fits into a 2.80 meter wheelbase.

To make it short: This car contains the technology for the new entry-level class at Mercedes, which the group calls “modular compact architecture”. Mercedes development board member Markus Schäfer recently told AUTO BILD: “You can see the battery in the compact Mercedes models from 2024”. When asked whether the A-Class was no longer called that, he grinned and said: “Wait and see”. In any case, according to Schäfer, “the start, seen from today, should be a digital firework”. 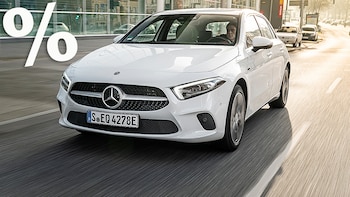 Buy Mercedes A class with discount

At carwow.de you can buy new cars at a discount, including Mercedes models such as the A-Class.

The entry into the A-Class was also a firework display: in 1997, the Stuttgart-based company brought an affordable entry-level model onto the market with the compact Mercedes; you could now drive a Mercedes for around 32,000 Deutschmarks – that is, for just under 2000 Deutschmarks more than was due for a VW Golf. In 2005, the Stuttgart-based company added a compact van to the range, which was particularly well received by pensioners.
When the A-Class was introduced in 1997, the hitherto shortest Benz (3.57 metres) made a “stunning” start: with a non-standard lane-changing driving maneuver at around 65 km/h – which later became famous as a moose test – brought in Swedish journalist at the wheel to tip the vehicle. A PR disaster for Mercedes!
The result: all A-Classes built up to then were retrofitted with the ESP stability program and a modified chassis. And: From 1999, Mercedes installed ESP in all of its cars as standard! The incident earned the A-Class a number of nicknames: Moose Class, Purzel, or the World’s Smallest Dump Truck. Funny: The interim storage for all vehicles that had not yet been converted was in Kippheim, Baden, of all places.

E-drive in the first A-Class

Mercedes gave the first foretaste of the A-Class in 1993 with the “Study A” at the IAA in Frankfurt, and in 1997 the production version was also at the IAA. Even back then, the plan was to equip the vehicle not only with petrol and diesel engines, but also with an electric motor. Equipped with a 30 kWh battery – developed with AEG – the model should cover 200 kilometers and was limited to 128 km/h. However, the electric version never went into series production – for economic reasons.

At that time, people were already thinking about hydrogen. Under the name “New Electric Car”, or “Necar” for short, Mercedes researched fuel cell technology with a total of six A-Class concept vehicles. Number two remains a Biedermann Seven years later and after 1.1 million vehicles sold, the second generation of the A-Class was in the starting blocks. This time, however, much longer: the Baby Benz now measured 3.84 and was available from then on as a so-called sedan and as a three-door coupe version.

Fleet is to shrink significantly

With the discontinuation of the A-Class, the Mercedes world begins with the C-Class – and thus at least around 43,000 euros. For comparison: A current A-Class is available for around 28,000 euros, the B-Class for just over 30,000 euros. We’ll see what comes after the A-Class in two years’ time.
However, the portfolio is to be reduced from the current seven (A-Class, B-Class, A-Class Sedan, CLA, CLA Shooting Brake, GLA, GLB) to four models – they should be purely electric and get new names. At what price it will be available is also still unknown.

Mercedes will continue to take care of all A and B classes. Service, maintenance and inspection can also be carried out at all Mercedes partners after production has ended. Of course, the car manufacturer also continues to fulfill the warranty claims. Are used car prices going up?

At the moment, there is no reason to expect that used prices for compact Mercedes models will increase. In the coming years, both models can still be ordered as new cars, a run on the ones already built should not start. In addition, there are plenty of used ones on the market. Even from the first series there are over 1000 offers in common used car exchanges, at prices of around 1000 to 3000 euros. Almost 7,000 copies of the current generation are even being offered, with prices starting at around 10,000 euros.

Connect Playstation, Switch & Xbox controllers to iPad & Co.: This is how it works