Facebook Twitter LinkedIn Tumblr Pinterest Reddit VKontakte Odnoklassniki Pocket
Clear edge with the XXL SUVsThis is Ford’s motto on the European market. The second generation of the Ford Edge was launched in Germany from 2016 to 2020 as an alternative to the European SUV mainstream. The all-wheel-drive SUV has held up well to this day. He’s still one imposing appearancethat attracts potential customers. In terms of format, it comes suspiciously close to the BMW X5 and Mercedes GLE, but in terms of price and technology it plays a whole league below that. 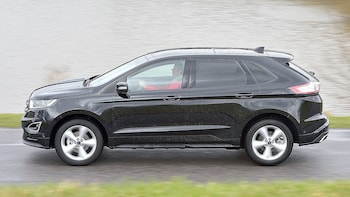 Ford Edge as a used vehicle with warranty – from selected dealers! (in cooperation with HeyCar)

Our test vehicle from the Autohus in Gyhum (Lower Saxony) was First approved in March 2018. This cost a new one Ford Edge as a 2.0 TDCi Bi-Turbo 4×4 Titanium including navigation system, panorama roof and LED headlights according to the Schwacke database a proud 53,820 euros, now it would be available for a moderate 21,980 euros.

Except for a thumb-sized dent in the hood and a tail light strip that is fogged up from the inside, the 4.81-meter-long SUV looks really fresh. But do the inner values ​​keep what the good first impression on the outside promises? Unfortunately not quite. On the one hand is that Edge a real buddy with American virtues: families will wasteful space for five people, which one can only wish for in some luxury sedans. the large seats and the crash-free chassis are of the soft variety. They go perfectly with the cozy character of the touring car, which was primarily designed for the American market.
LED headlights, parking assist and adaptive cruise control also work convincingly. The sense of the sporty ST-Line, on the other hand, can be argued about. It fits better with the overall concept Luxury equipment Vignalewhich offers, among other things, specially quilted leather seats with heating and ventilation. Top are next to the Payload of 606 kilograms, the huge trunk with an electrically opening tailgate and a volume of 602 to 1847 liters as well as the powerful sound system with the centrally located Sync 3 infotainment touchmonitor.

The two-liter biturbo diesel is a classic engine of reason

The downside of the Edge medal: three and a half years of marathon operation and 175,810 kilometers have left too clear signs of wear. The leather rim of the heated multifunction steering wheel begins to dissolve over a large area. The back of the driver’s seat cheek is probably flattened almost completely out of shape by a heavy driver. And the carpets in the footwells and in the trunk are already looking pretty worn out. The 2.0 liter four-cylinder diesel engine is a classic engine of reason and was installed until August 2018. It complies with the Euro 6b emissions standard and, given its gross vehicle weight of 2555 kilograms, is just an adequate engine.
In view of the otherwise high level of comfort, this is annoying on low tours sewing machine type nails the otherwise properly insulated engine and the clearly audible tank sloshing. Two tons of possible trailer load (up to 12 percent incline) should be sufficient for the majority, but are not a paragon for an all-wheel-drive SUV of this size. The standard Six-speed Powershift double coupler tends to take uncomfortable pauses for thought, especially when moving off and maneuvering. Ford improved at the beginning of 2019 with an eight-stage torque converter. The moderate one In addition to new diesels with 150 to 238 hp, the facelift brought a slightly sharpened design.

With offered in this country Be careful with petrol versions: They are Gray imports. If these were imported second-hand from the USA, it is essential to research online using Carfax information to determine whether the vehicle may have suffered previous damage in the USA. Positive for many German vehicles: The Warranty has often been extended to seven years. That reduces the risks and side effects.