The F1 teams of the ex world champions

Fernando Alonso comments on the future plans of his own racing team. Will he be the seventh world champion with his own Formula 1 team?

Dhe crisis can also be an opportunity. In the wake of the financial crisis in 2009, three new racing teams entered Formula 1 in 2010. The entry into 2022 would be ideal: new regulations, falling costs, capped budgets, sporting fairness.

When it comes to possible new Formula 1 teams, the name Fernando Alonso is always mentioned. The two-time champion has his own racing team that started in the Formula Renault Eurocup youth series in 2019.
Now Alonso also commented on the corresponding rumors: “I am often asked by many people whether we will one day create a Formula 1 team. My answer to that is 100 percent no. With a Formula 1 team you have more problems than joy – because the budgets are so high. What I can imagine is a team in Le Mans, like Patrick Dempsey does. ” 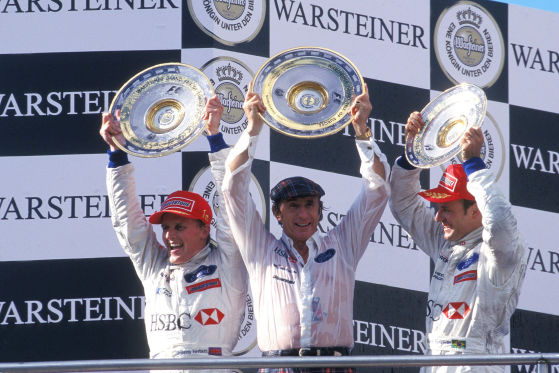 Jackie Stewart can’t quite understand Alonso. His racing team (now Red Bull) won the European GP in 1999. “This win was much nicer than all of my 27 before. Because the responsibility and dimensions are much bigger, ”he explained at the time.

Alain Prost thinks it’s a shame that today Formula 1 world champions no longer have their own GP teams. On AUTO BILD MOTORSPORT he says: “We used to be racing teams, now everything looks more like business. And that’s one of the reasons why we’re losing fans. They don’t quite understand why a beverage manufacturer like Red Bull can beat automotive brands and real racing teams. ”

After their careers, six Formula 1 world champions were also team owners in GP racing: Jack Brabham, John Surtees, Graham Hill, Emerson Fittipaldi, Jackie Stewart and Alain Prost. As drivers, they bring together 15 world titles and 126 victories. As a team owner, however, only four titles and 36 wins. And except for the Stewart success in 1999 at the Nürburgring, all successes fell on Brabham. Jack Brabham even won the title of driver and team boss in 1966.

After all, some Formula 1 champions founded teams in other categories. For example, the Rosberg team is active in the DTM. Nigel Mansell had his own Formula 3000 racing team, “but I only lost money there. Lifting the team into Formula 1 was impossible, ”said the Briton.

The last person to try this was Jacques Villeneuve in 2011 in collaboration with the Italian Formula 2 team Durango. But their application was rejected by the FIA.

The dream of fans of an Alonso F1 team against a Schumacher F1 racing team (Ralf Schumacher is a successful team owner) is just a nice dream. And so the 1999 European GP may remain unique. At that time there were three drivers from racing teams on the podium led by ex-champions: Johnny Herbert in the Stewart Ford before Jarno Trulli in the Prost Peugeot and Rubens Barrichello in the Stewart Ford.

Ingenious web services: this is how you find everything - even UFOs

Professional tips for savers: These tips will help you get through the corona crisis