Aston Martin driver Sebastian Vettel stays outside too long in the rain chaos at the Russian GP and thus falls out of the points.

D.The late rain turns the Russian GP into a lottery in the closing stages. Sebastian Vettel (34) is one of the losers. The Aston Martin star is in tenth place in the points until shortly before the end, but after the casting at the end, Vettel goes home in twelfth place without points, one place behind his teammate Lance Stroll.

“Today it had more to do with luck than with experience,” says the German after crossing the finish line. The four-time world champion is playing poker similar to McLaren star Lando Norris when the track gets wetter. “The idea was: if the rain subsides again, that we save the pit stop,” explains Vettel and justifies the risk: “At that point it was still possible, the second part of the route was still dry. But then there was a lot more rain, that was it for us and our race. “

The Heppenheim-based company still doesn’t regret the decision: “Of course we could have done it differently, with hindsight you are always smarter. But at that point it felt okay. “

The Heppenheimer is one of the victims of the weather lottery, but doesn’t blame his strategists: “Risk was rewarded one way or another today, but not in our direction. But it could have stopped, then it would have been the other way around and the drivers with rain tires would have had problems. ”The same applies to stable mate Lance Stroll, with whom the German clashes on lap 48 on the track. The Canadian was in the points ahead of Vettel for the entire race, but fell behind in the drizzle on a slippery slope with slicks. Vettel started to overtake and is jostled away by his teammate on the outside. The result for Vettel: a kiss from the wall – nothing more. 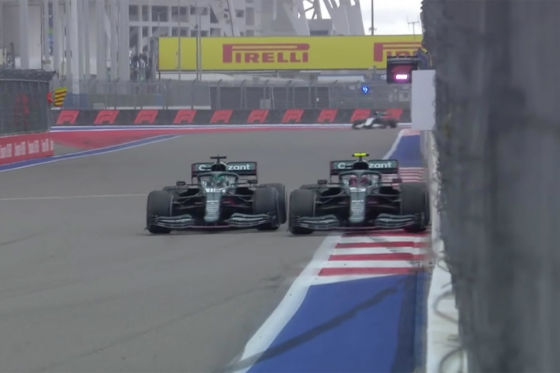 Stroll and Vettel clash on lap 48 on the track.

“That was a misunderstanding,” waves Vettel. “I think he didn’t see me and then it got tight for me, but thank God nothing happened.” From the cockpit, the situation looked like this: “I thought Lance would leave me the gap on the outside. But somewhere it is understandable that under these conditions he does not look into the rearview mirror all the time. We were both on slicks and it was slippery, ”the Aston Martin star downplayed the scene. “It’s a shame, because in the end we are both not on the points.”

However, Aston Martin was not entirely happy when the two green racers met on the track. Cameras captured how team owner Lawrence Stroll and team boss Otmar Szafnauer had Vettel explain the scene in the hospitality.

But not only in the duel with Vettel was Lance Stroll not quite up to date. Later he also rammed Pierre Gasly in the Alpha Tauri. For this he collects ten penalty seconds and two penalty points in the Formula 1 register of sins (now eight in total). At least the time penalty doesn’t matter. Since Vettel was flagged with one lap less, Stroll stays in front of his teammate.

Team boss Szafnauer sums up: “The result was ultimately disappointing for us.” In the constructors’ championship, the team remains in seventh place.