Lando Norris (McLaren) looks like a sure winner up to six laps to go. Then the rain set in – and the pole setter gambled away. In contrast to his pursuer Hamilton, the Briton refuses to come in to switch to intermediates. That will be his undoing. The rain is getting stronger. Due to his sledding game and the late stop, Norris falls back to seventh place.

Hamiilton consoles his young compatriot: “Lando did such a great job, had great pace, then something like that! Like everyone else, I didn’t know what the weather was going to do. Finally my 100th victory. I thought it would never come! “

Max Verstappen also benefits from the rain and a quick switch to intermediates. He moves up from last place on the grid to second. Without the rain, more than seventh would hardly have been possible. “Losing just one place on Lewis here isn’t that bad. I wasn’t expecting that when I woke up this morning. We stayed out of all trouble and in the end made the right decision. “ 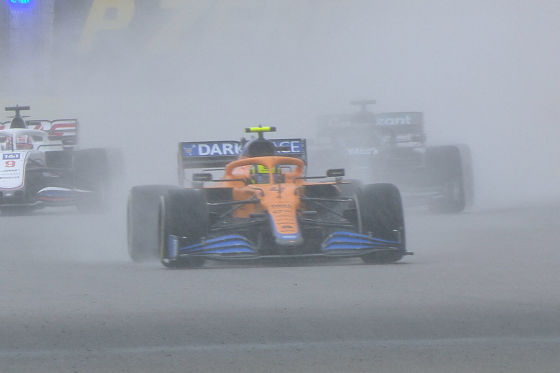 Norris and McLaren gamble away.

Sebastian Vettel lands in twelfth place behind his team-mate Lance Stroll. When it started raining, the two Aston Martins touched each other briefly.

Mick Schumacher has to park his Haas-Ferrari in the pits with a technical defect. Annoying for the German, who has only just overtaken his teammate Nikita Mazepin after a bad start and is in 19th place.

Schumacher: “I don’t yet know what exactly broke. Seems to be internal to the engine. Tried to solve the problem but couldn’t. It’s a shame, because at the time I was the fastest car in the field behind Lewis Hamilton. “