Facebook Twitter LinkedIn Tumblr Pinterest Reddit VKontakte Odnoklassniki Pocket
BMW 2 Series is not always BMW 2 Series. As fans of the brand know, there are major differences within the model family. While both the Coupé with the internal code F22 and the successor G42 are equipped with longitudinal engines and rear-wheel drive, both the Active Tourer and Gran Coupé with a transverse engine roll off the assembly line. This surprised many, especially with the Gran Coupé, after all, the 2-Series sedan is visually quite sporty and therefore much more similar to the Coupé than the BMW 2-Series Active Tourer van. But the 2 Series Gran Coupé also has its advantages with a transverse engine and front-wheel drive – and is currently available well below the list price. At carwow.de you can currently save up to 11,565 euros (As of November 21, 2021). (Here are important tips for buying a new car on the Internet!) 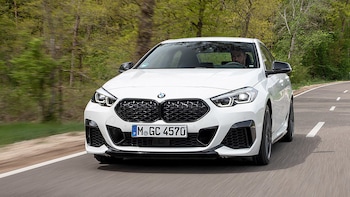 For the 2 Series Gran Coupé, too, there are two petrol engines in three output levels, as well as two diesel units with a total of three expansion levels. The most powerful versions are optionally available with the xDrive all-wheel drive system, helping some BMW fans to get over the lack of rear-wheel drive. As with the 1 Series, there is also an M Performance model for the Gran Coupé, the M235i xDrive Gran Coupé with 306 hp from a two-liter four-cylinder. And it is precisely this top model with sports automatic transmission, all-wheel drive and numerous sporty series features that brings in the most discount at carwow.de. That can in the face of a RRP of 54,850 euros also really no harm. At carwow.de there is a discount of up to 11,565 euros with the corresponding configuration of the sporty 2 Series Gran Coupé. A real announcement, after all, the M Performance models in particular are not notorious for their high discounts. (Attention: the transfer costs reduce the discount by a few hundred euros).

But not only the sporty offshoot of the Gran Coupé impresses with its high savings potential. You can also save a lot of money with the diesel versions when you buy them via carwow.de. Even the cheapest diesel, a 216d with three-cylinder, 116 hp and automatic, is over 6000 euros cheaper and is available from 29,139 euros. If you choose that instead of the basic model 220d xDrive Gran Coupé in the “Luxury Line” with at least 190 hp from a two-liter four-cylinder, carwow.de lists prices from 39,139 euros. Even without additional equipment, this corresponds to a discount of 8,661 euros or around 18 percent. In view of such numbers, one can cope with the fact that there are still transportation costs that reduce the discount a little.