Facebook Twitter LinkedIn Tumblr Pinterest Reddit VKontakte Odnoklassniki Pocket
Wind noise and the rolling of the wheels are left out: in electric cars you can hear every little cracking and creaking even more clearly (overview: advantages and disadvantages of electric cars). Tesla drivers around the world are now noticing this. They report: If you turn in the Model 3 and Model Y, it suddenly squeaks. Hamburg engineers from MEYLE took on the problem. 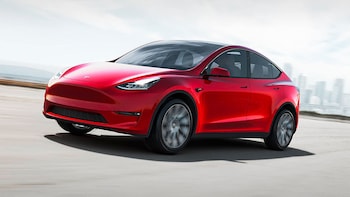 At carwow.de there are many new cars with a discount, including the Tesla Model Y.

“Squeaking noises can occur with many everyday objects after a while,” says Stefan Bachmann, Head of Chassis & Steering at the supplier. “But we didn’t expect that from a Tesla. We wanted to get to the bottom of this strange squeaking sound right away. Just as a matter of principle.”

After an analysis and numerous tests, the MEYLE development team found out: The squeaking comes from the wishbone. Due to the design, it is not sufficiently protected against moisture. So if water gets into the ball joint, this leads to the annoying noises. In rare cases, even the precision of the steering can suffer.
Therefore, the developers first made a prototype in a new design and improved it until there was no more squeaking from the control arm in Tesla Model 3 and Model Y ran out of.

Compared to the original part from Tesla, the MEYLE wishbone is not made of a steel-plastic composite, but of forged aluminum. On the one hand, this saves weight and, on the other hand, provides even more stability.

The ball joint is larger in the MEYLE version and has no openings or grooves in the upper area. As a result, no water can penetrate.

The MEYLE-HD wishbone is expected to be available in the first half of 2023. Well done – right, Elon Musk?

Where is she now? Pat Barwick