Facebook Twitter LinkedIn Tumblr Pinterest Reddit VKontakte Odnoklassniki Pocket
A liter of premium petrol is sometimes around two euros more expensive. Gas stations become places of terror. There are also cars, so it doesn’t hurt that much. No, we don’t mean electric vehicles. We’re talking about normal compact cars, with a combustion engine under the hood and even a lot of guts: Honda Civic and Mazda3 compete as economical petrol engines for comparison. 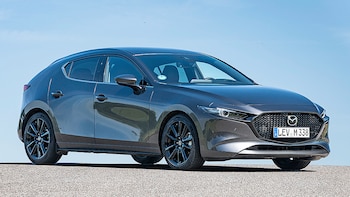 With the introduction of the new Civic, Honda is putting a rather complex piece of drive technology into the golf league to quench the thirst of the compact (5.0 liters per 100 kilometers is the announcement) and to effectively clean its exhaust gases.

So much in advance: The mix of 2.0-liter petrol engine, electric motor and extra generator unit, including a special power distribution without a gearbox, actually works very economically and unexpectedly without complaint in the Civic e:HEV – we are definitely surprised.

The Mazda breaks its consumption promise

The matching counterpart to the Civic e:HEV comes from Mazda. Here the developers have flanked the four-cylinder unit of the 3 e-Skyactiv X 2.0 M Hybrid with additional mechanics in a particularly complex way – in order to let it loose on the road in a very simple and efficient way.

The slightly electrified 2.0er with delicate supercharging, which ignites according to the Skyactiv-X principle, should not consume more than 5.3 liters of Super per 100 kilometers. Sounds great – we’ll check that out.

The Civic has a mid-range feel

First to the character of the two. After a few meters in the Honda, the question arises: is this really a compact car? The Civic looks airy, is full, touches well, makes something. Could also be middle class. In fact, the Honda beats the Mazda in terms of space and sense of space by important points. In addition, the trunk is larger, the rear seat can be folded more easily, the door cutouts are larger.

In addition, the Civic is tuned to be more comfortable. Where the sporty, tighter Mazda finds it difficult to iron over it smoothly, the Honda hugs the road more gently. The complex drive system also hardly bothers you. The interplay of pure electric drive, exclusive combustion engine driving and combined variants via clutches and power switches works audibly, but in the end it is pleasantly cultivated and hidden away.

This sometimes feels very passive for the driver, especially when accelerating slightly, but it always moves smoothly and even at high speeds it still pushes forward. One can say here: The Honda is the more universal, more sociable car in this test. But it’s a pity: The Civic seems unlovingly mounted, the unfinished painted areas in the entrances and unstable armrests sensitively disturb the impression of quality.

Worse still, Honda follows the now-typical quirk of controlling everything from the central touchscreen. Menus and sub-levels are plentiful, “target points” for selecting the functions are tiny, the work surface is far away – this makes operation strenuous, ultimately the system distracts a lot.

The operation works better in the Mazda3

That works better in the Mazda: the reason is the small knob in the center console. Here you can GPS and control infotainment perfectly. As in the Honda, the Mazda driver also looks at a clearly drawn round speedometer, the air conditioning is set using a rotary control – that’s how it should be.

Elaborate engine technology in the Mazda is hardly noticeable

As with the Honda, there is little evidence of the complex inner workings of the 2.0 engine. The four-cylinder runs linearly through its speed range, there’s not a lot of thrust – despite the supercharging of the machine – but just as little strained undertones.

Space in the back

seats in the back

However, the Skyactiv-X technology does not work as well as Honda’s savings concept. According to our measurements, the Mazda3 burned an average of 6.7 liters of Super – at least 1.3 liters more than the Civic. It’s a shame for the Mazda, especially as it brings the more mature front seats (with better lateral support) that are more suitable for long journeys.

For the sake of completeness: Even if the 3 lags behind in the sprint, on the highway it casually hangs on the Honda, which is limited to 180 km/h. But that’s not an important discipline when fuel prices are around two euros.

Formula 1: Mercedes defines goals for the end of the season