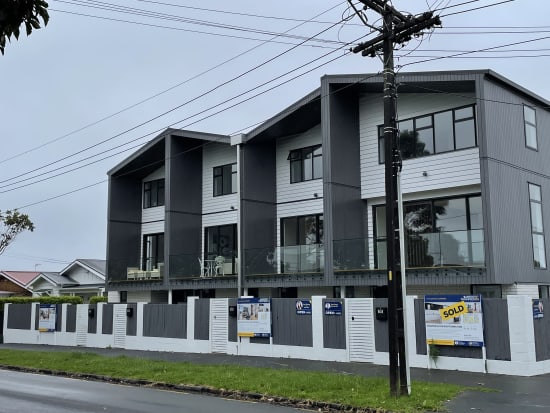 Who wants to buy a house in a street where an apartment block could rise next door? Bruce Morris finds a Sword of Damocles hovering over thousands of Auckland homes as draft council proposals are already eroding market prices.

Hundreds of millions of dollars would have been wiped from the values ​​of homes in the country’s biggest cities through Parliament’s sweeping changes to local authority zoning.

While media attention is focusing on the potential loss of streets of old bungalows and villas, the widespread impact of the plan to intensify housing will seriously hit the value of tens of thousands of homes beyond those areas.

Government moves, supported by National, became law last year, with the objective of boosting housing density and affordability – pushing aside any need for resource consent and removing the right of neighbors to object.

The legislation requires councils to allow three houses of up to three storeys high to be built on most residential sites, and forces them to open up land near town centers and railway stations to terraced housing and apartment blocks reaching six storeys and higher.

Auckland is in the spotlight because planners last month revealed the council’s draft response to the legislative directive.

But the influence it will have on the city’s future may have gone largely unnoticed by homeowners, many of whom seem unaware of the impact zoning changes may have on the value of their prime asset.

The council’s feedback process – the first stage in acquiescing to the state directive – closed on Monday, with around 6000 responses from a city of 1.7 million people and 600,000 ratepayers.

They will now be considered by planners before the council produces the final form in August. After that, formal submissions open in front of planning commissioners, who will recommend any changes before the new blueprint is endorsed by the council and passed to the Government for its approval. This will be well into 2024, and it may be as late as 2025 before the council formally amends its Unitary Plan and introduces the new zones.

If this sounds like the Unitary Plan all over again, there’s a certain truth to that. But where the hurried Unitary Plan of barely six years ago was measured in its nature, this process is decidedly revolutionary – and, two years or more before it is in place, those familiar with the property market realize it is already having an impact on tens of thousands of properties across Auckland.

Great, say some advocates and those looking for more homes – and affordable homes – in the wider city, even if supply is inching closer to demand and the 2022 definition of “affordable” is discredited.

But as soon as the draft plan was revealed last month, real estate agents saw its wide scope and its certain erosion of values ​​in many quarters, with a likely increase in very select areas.

Almost a quarter of the city’s old villas and bungalows have lost their “single house” zoning protection and many have been shunted into the “mixed housing” zone now common across Auckland – allowing three storey developments to pop up next door.

Worse, in the eyes of owners if they’ve taken the trouble to look at the draft maps, their properties may now be zoned for maximum development under the “terraced house/apartment” zone that allows blocks of six storeys or more.

But they are just the low-hanging fruit of media headlines and television news clips.

Dig into the maps (with “still under investigation” overlays to line up with future light rail paths) and you’ll discover substantial blocks of residential land where the future will be high development and multi-storeyed apartment buildings.

They have been zoned that way because they fall within the arbitrary range of 400m or 800m from a town centre, railway or bus lane station, or sit along a main road.

(The existing Unitary Plan created similar zones, but they were nowhere near as prescriptive and used much more sparingly. Yet, under its town planning guardianship, the city still has potentially the space for a further 900,000 new homes – 50 per cent more than Auckland’s existing housing stock – even if developers have more hoops to jump through than under the new Government legislation.)

In Auckland, the draft plan has lowered a Sword of Damocles over the proposed high development zones. Unless some areas can persuade planning commissioners otherwise, it will stay forever, as the face of the city adapts to intensification.

Jolly stories under the old rules of neighbors banding together to sell their properties to developers with open checkbooks are fanciful. The reality is there are only so many developers and so many projects to work on, and these are tough times for anyone wanting to stick up an eight-storey apartment block in the suburbs.

But the potential’s the thing, and, for the vast number of homeowners in the high-development zones, the council’s new map for the future rides over their rights to enjoy the land they own without the impact of an apartment block as a neighbor.

Then, apparent since the draft scope was revealed on April 19, there’s the sinking value of their prime asset. From the moment the council publicized its response, many millions of dollars would have been silently sliced ​​from the values ​​of properties in zones ear-marketed for intensive housing.

From that time, real estate agents following the rules would have been required to reveal the planned zone changes to clients; to hold back that information would probably leave them open to serious challenge, even if the new rules are at draft stage.

For people in the draft high-development zone looking to sell now or in the future, the question they face is: Who would want to buy a family home in a zone where an apartment block may rise to cast a pall across the street?

Few people, of course, would risk that possibility and will look elsewhere. But those prepared to take a punt will demand a hefty discount and they will be in a position of strength – and probably bidding alone – in an already softening market with decline predicted in the two years ahead.

At this early stage, no one knows how the impact will play out. But there’s already talk of hundreds of thousands of dollars cut from pre-plan values ​​to get a sale, assuming agents could find a buyer willing to gamble a particular zone would be overturned at the planning hearing stage.

As time passes and developers become more confident about the future, they will naturally wield their purchasing power to get a good deal in a high-development zone. No more stories of neighbors banding together to negotiate a premium.

Imagine a couple living in a nice two-storey home on 750 sq m and heading for a retirement village. They’re in a street zoned for apartments and a section of that size will easily handle a multiple-storey block.

The agent can find no “traditional” buyer interested in risking a high-rise as a neighbor in the years ahead. That leaves the developer alone to make an offer and, even if a competitor decides to get involved, the price will be low. In this environment, developers will have no fear of missing out – another opportunity will arise soon, probably at a lower price, as the face of the city adapts.

While values ​​drop in the high-development zones, there will be beneficiaries among other existing homeowners.

Properties in the shrunken single house zones – most of them created under the Unitary Plan because they have special character – will become more in-demand through their protection against intensification.

But not all of them will end up with the security they once enjoyed. Some will discover the street next door may now be zoned for apartments – and that, over the back fence, will be just as damaging to their values ​​as if it were next door. An Ode for Trevor Mallard