With the ML-T, Hymer has been addressing comfort-conscious adventurers for years. AUTO BILD REISEMOBIL is testing the lavishly equipped CrossOver special model with all-wheel drive and high level of self-sufficiency.

UIndependence is what the majority of us associate with motor home ownership. Unlike most caravans, there are large water tanks here, and the gas supply and on-board battery also ensure the supply of essentials for at least a few days. The only limits are the capacities of these features. Wouldn’t it be worthwhile to turn a few of the adjusting screws a little further? At Hymer, you must have thought something like that when you designed the CrossOver special models. One of them is based on the Grand Canyon S panel van, the other on the narrow, semi-integrated ML-T 570. Both roll on the as standard all-wheel drive Sprinter with 190 hp six-cylinder and seven-speed automatic converter. That increases the longitudinal dynamic independence, but there is also the six kilowatt diesel boiler from Truma and that Smart battery system with solar system and inverter.

The ML-T brings self-sufficiency and adventure 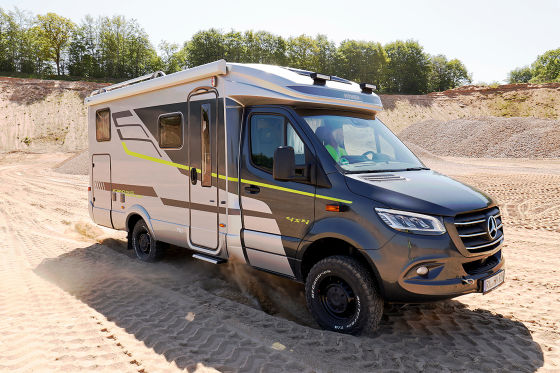 That’s him: A straight through as compact Comfort mobile for two who value a plus in self-sufficiency – and the special appearance. With studded tires, raised by almost eight centimeters, additional LED headlights and the spare wheel mounted on the rear he looks a lot like adventure. There are also neon yellow decorative stripes on the silver paintwork – almost progressive for a motorhome. The interior design, however, has in common with its serial brother. Dominates here classic wood look in dark shades; no trace of NeoPep. It’s a shame, but it’s cozy. Ambient LEDs bathe everything in soft light, and the upholstery is very comfortable.

The CrossOver is more down-to-earth inside than outside 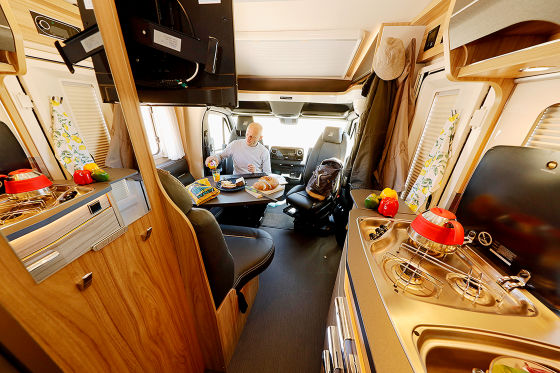 He has: Immediately to the left of the entrance is a practical cloakroom, to which the two rotating pilot seats, a multi-adjustable table and the L-shaped bench are connected. This is followed by the easy-care bathroom with swivel wall, opposite the compact kitchen with cooker-sink combination and Slimtower compressor refrigerator. There’s in the stern two single beds and plenty of storage space in cupboards and the rear garage. Two airbags, electric tank emptying and other things are standard, goodies such as the MBUX multimedia system, adaptive cruise control, automatic air conditioning, panoramic roof windows, awnings, fitted sheets, roof rails and much more are part of the edition package. This is how he drives: With the standard top engine and the assistance systems comfortable and safe like a car. The overview is also thanks to the excellent rear view camera very good, the operation self-explanatory. Despite the studded tires, the interior is very quiet. The increased ground clearance relaxes ambitious off-road drivers, but the rear overhang sets limits at some point. So you shouldn’t go too high-spirited – The only thing that saved us in the sand was the longitudinal lock.

Conclusion: The concept of the ML-T is already convincing in series production. The CrossOver package goes a little further – but at a price that suits the self-confident appearance. Verdict: four out of five.