Facebook Twitter LinkedIn Tumblr Pinterest Reddit VKontakte Odnoklassniki Pocket
● Ioniq 5 is the first vehicle on the E-GMP platform
● 800 volt technology allows rapid fast charging
● Prices start at 41,900 euros
The Ioniq 5 is here! The first car from Hyundai’s new electric brand is coming along 800 volt technology and optional all wheel drive. With this alone, the Korean stands out clearly from the most important competitor VW ID.4, the Dimensions is practically on a par with the Ioniq 5. The ID.4 only comes with a 400-volt network and therefore charges more slowly. So starts Hyundai with the Ioniq Major attack on VW’s ID family? Possible! However, the newly developed electric platform from Hyundai must first prove what it is capable of. So there is a lot of responsibility on the shoulders of the Ioniq 5.

Prices: This is what the Hyundai Ioniq 5 costs

The Hyundai Ioniq 5 starts in the Base now at 41,900 euros. Orders are accepted and the car can also be configured online. There is also the entry-level model for this Rear-wheel drive and 125 kW (170 PS). The top model with 225 kW all-wheel drive (305 hp) in the highest equipment line costs 60,750 euros. The Korean electric car is through that BAFA environmental bonus fully eligible, what the Starting price at 32,330 euros can press.

In addition to the basic equipment, Hyundai offers the Ioniq 5 in three additional equipment lines:(All sizes here are only excerpts)

Base: In addition to full-LED headlights and LED taillights, there are 19-inch light alloy wheels (click here for the AUTO BILD summer tire test) and the two 12.25-inch displays in the cockpit as standard. A navigation system, a reversing camera, adaptive cruise control with traffic sign recognition and a sliding rear seat bench are built into every Ioniq 5.
Dynamiq: In addition to the basic scope, there are features such as a front parking aid, a motorway assistant, a battery heating system, an extended emergency braking function and an electrically adjustable driver’s seat in the electric car. Optionally, projection headlights with pixel optics daytime running lights, a heat pump and a parking assistant with remote control can also be ordered here.

Techniq: Builds on the Dynamiq Pact and supplements it with a standard heat pump, the LED package, an insulated windshield, a sliding center console and fabric-leather seats. Optionally there is also a panoramic glass roof, a Bose sound system, an electric tailgate and 20-inch rims.

Uniq: All the extras mentioned are included here in addition to the scope of the Techniq package. In addition, an augmented reality head-up display is moving into the vehicle. Electrically retractable door handles increase aerodynamics, and the solar roof and the relax function for the front seats are also available here.

Anyone interested in a Hyundai Ioniq 5 should also dare to compare prices on the Internet. The electric SUV is now also available online at attractive conditions. At carwow.de (cooperation partner of AUTO BILD), for example, you can save more than 10,000 euros on the list price. 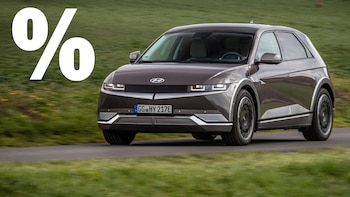 Buy Hyundai Ioniq 5 at a discount at carwow.de

At carwow.de there are many new cars at discounts, including the Hyundai Ioniq 5.

Warranty: Eight years for the Ioniq 5

Hyundai has been generous for years Warranty periods known. After Kona Elektro and Ioniq Elektro, the Ioniq 5 will also be included in the future eight year guarantee delivered. It consists of two parts. Hyundai offers five years Manufacturer guarantee without a mileage limit and then extends it for a three-year period Follow-up guarantee. Also the battery pack of the electric car is through a eight year warranty protected, but one thing applies here Upper kilometer limit of 160,000 kilometers.

Dimensions and optics: Ioniq 5 is retro-chic

The Hyundai 45 EV-Concept was the inspiration for the design of the Ioniq 5 as early as 2019. The angular study gave a very specific outlook on the production model. However, there is not much left of the angular look. Regulations and the manufacturing process have the Ioniq 5 sucked. Even so, the appearance is clear more technical than the competition. The front already gets the in the base Pixel optics with the Four eyes face. LED headlights are always standard, with a higher level of equipment, LED projectors move into the luminaire carriers. The apron contains angular elements and air flaps that open or close depending on the cooling air requirement of the batteries. On the side are next to the 20 inch rims especially the joints in the sheet metal and the retractable door handles to recognize. At the rear, the pixel design of the headlights also extends to the taillights. Luminous blocks create a light signature and mix the retro charm of the 80s with the modern look of the Korean.

The crossover with electric drive should offer the occupants plenty of space, and with a view to the dimensions, this resolution can also succeed:

Range, battery and charging: thanks to 800 volts, short charging times

The Ioniq 5 is the first vehicle from the Hyundai group that is based on the new E-GMP platform builds up. The Korean counterpart to the MEB modular system from Volkswagen, however, clearly stands out from the German competition. Thanks to 800-volt technology, it should Fast charging namely, similar to the Porsche Taycan, be a piece of cake. The battery can be charged to 80 percent in 18 minutes According to Hyundai, less than five minutes should be sufficient for a range of 100 km. The battery size for which this applies, however, is not yet revealed. You can choose from 58 kWh battery with a range of a little less than 400 km according to WLTP and the 72.6 kWh-Electricity storage system with a range of up to 480 km. The Ioniq 5 can even pull trailers (up to 1.6 tons).

When it comes to drive, Hyundai offers its Ioniq 5 customers four options:

There is also an optional for the e-car Roof with built-in solar cells. Together they provide 205 watts. According to Hyundai, tests were made in southern Europe that promise an annual charging capacity of up to 2000 extra kilometers (around 5.5 kilometers per day). In this country, however, the yield from solar cells is likely to be lower. The battery of the Ioniq 5 can also be huge Power bank be used. Thanks to “Vehicle to Load” technology (V2L), the power storage can not only energy record, but also to other consumers hand over.

Interior and connectivity: Generous space in the Hyundai

in the Interior should The Ioniq 5 passengers have one thing above all else: place! In the electric car, there is no center console between the driver and front passenger seat, which should create an airy feeling. In the first test, the promised space was also able to score in practice. Throne on the dashboard two standard 12.25-inch screens. Apple CarPlay and Android Auto are standard, but still have to be connected to the Ioniq 5 via a cable. The optional head-up display is supposed to turn the windshield into a screen thanks to augmented reality and project the most important information directly into the windshield for the driver. A special feature of the Korean electro is his adjustable front seats. You can be in a comfortable Lying position to be able to comfortably spend the charging break on long journeys. The choice of interior materials is largely sustainable, the rear seat can be moved and therefore offers flexible use of the interior.

First ride: The start is impressive

AUTO BILD has already driven the electric Korean. The start of the Ioniq 5 is with 305 hp top model quite impressive. The landing gear is not particularly sporty and attaches great importance to comfort. Fast charging with 800 volts also works well in practice. You can find the detailed driving report here!

Assistants: Semi-autonomous driving in the Ioniq 5

In addition to the typical helpers such as parking aid, 360-degree camera or cruise control, Hyundai also offers the Ioniq 5 with the next generation of the Highway Driving Assist on. The semi-autonomous driving program can not only keep the lane itself and regulate the distance to the vehicle in front, in the new expansion stage it should even make it easier to change lanes.

When it comes to autonomous driving, there is even more – this is shown by a project that Hyundai is presenting in its joint venture “Motional” with the supplier Aptiv at the IAA 2021 in Munich. The so-called “Ioniq 5 Robotaxi” was with more than 30 sensors equipped, including cameras, radar and lidar sensors; the car should drive to level 4 independently.

The sensors are clearly visible on the vehicle so that the Robotaxi is visually different from manually controlled cars. And not without reason: The vehicle is to be used by Lyft in the USA from 2023 and transport passengers there on public roads. Whether and when the technology – or elements of it – will also be used in the regular Ioniq 5 has not yet been determined, according to Hyundai.

After ABN and ING, ASN and SNS are now also screwing savings interest to zero

Gamemania customer data on the street after ransomware attack

Tips: How to make your car fit for the winter