● The Kona facelift is particularly noticeable at the front
● Still available as a hybrid
● Prices start at 19,900 euros

Optics: Above all, the front of the Kona changes

The Hyundai Kona is getting its first facelift after three years and is growing four centimeters in length. It is available as a combustion, hybrid or purely electric car. Visually, something is happening, especially at the front. The cascade grille gives way to a significantly larger model, which is separated from the lower air intake, which is also larger, by a wide bumper. This bumper merges into the paneling of the wheel arches.

The already narrow LED daytime running lights on the edge of the bonnet narrow into even narrower slots. In the Kona facelift, the headlights are again separate from them, one level lower, and have been given a new interior and a more classic shape. The taillights have also been given a slightly different signature and their design has been adapted. It is particularly noticeable that the turn signal is now under clear glass, which brings a little more calm to the design. The redesigned rear apron is more horizontal and looks flatter.

Buy: Hyundai Kona at a discount

The facelift of the Hyundai Kona is already available at discounts on the Internet. Usually the greatest savings are made on the top engine in the highest equipment trim. The Kona is the Kona Hybrid in the Prime line with 141 hp. At carwow.de (cooperation partner of AUTO BILD) you will find constantly changing offers for the Korean SUV. 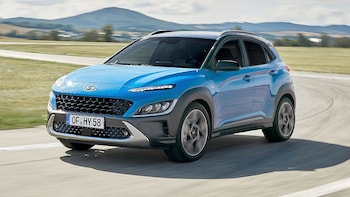 At carwow.de there are inexpensive new cars, including the new Hyundai Kona.

Interior: No more handbrake in the Kona

In the interior of the Kona facelift, the changes are rather inconspicuous. To support the horizontal alignment of the dashboard, the center console now runs underneath. An electronic parking brake takes the place of the handbrake lever. The redesigned ventilation nozzles with narrower aluminum trims look a bit higher quality than their predecessor. If desired, heated rear seats and a USB port in the second row provide more comfort.

The top infotainment now also consists of two 10.25-inch screens for the combustion engine, one for the digital speedometer and one on the dashboard. Hyundai has brought the system up to date: Apple CarPlay and Andorid Auto can now also be used wirelessly, the central screen can be split and there are various online services that can also be used via smartphone app. This includes real-time traffic information, information on free parking spaces or the location of the car. The Kona is equipped with analog instruments and a central display as standard, which increases from seven to eight inches with the facelift.

In addition to new colors and seat covers, there are now a number of new or revised assistance systems. This includes the further development of the active blind spot assistant. Brake intervention makes it difficult to change lanes if the driver overlooks another car. The traffic jam assistant keeps the Kona in the middle of the lane and the previously selected distance from the vehicle in front. The new exit assistant not only warns of vehicles approaching from behind when the rear passengers want to get out, it also locks the doors. For the first time, the Kona is also available in the sporty one N-Line equipment with its own, much more aggressive aprons, paneling in body color and two tailpipes with its own 18-inch rims. The interior is predominantly black and accentuated with red decorative stitching.

Comparison test: Kona in place behind the T-Roc

The facelift of the Hyundai Kona had to prove itself against Ford Puma and VW T-Roc. Each of the compact SUVs scratched the 200 hp limit on the engine side. Specifically, the 198 hp Kona competed as the N-Line against the 200 hp Puma ST and the VW T-Roc with 190 hp. While the Puma draws attention to itself as a guarantee of fun, the VW and Hyundai can make their mark when it comes to everyday suitability. The VW shows up as King of Compromise. The steering is direct, but not pointed; the engine sound present, but not intrusive; the DSG awakebut not overzealous. We feel similar tendencies at Kona, but there are more disturbances with the Koreans. In the end, the rating is tight: The T-Roc can only just prevail against the Kona, the Puma brings up the rear. The full comparison test is available here. The conclusion of Gerald Czajka and Mirko Menke: As similar as Puma, Kona and T-Roc are on paper, so are their characters. The well-balanced VW secures victory surprisingly just ahead of the cheap Hyundai. Not everyone likes the sporty Ford, but it can score too.

The smallest diesel is not used with combustion engines. The offer now starts with the 120 hp one-liter gasoline engine. The three-cylinder can also be equipped with a 48-volt system for the Kona facelift. This is standard on the next-stronger unit, the 1.6-liter diesel with 136 hp. The top model with a 1.6 liter petrol engine is boosted to 198 hp (previously it was 177 hp) and comes with a seven-speed automatic. The two more powerful engines are also available with all-wheel drive. For the drives with a 48-volt system, there is either an automatic or a six-speed gearbox with an electronic clutch, which allows the engine to be decoupled and to sail. The Kona is also available again as a hybrid with 141 hp. There is also a 1.6-liter gasoline engine and an electric motor. The electric version has also been revised.

The Hyundai Kona has been a combustion engine since the end of 2020 19,990 euros at the dealer. At the beginning of 2021, the hybrid and the electric variant were also submitted later. Here the prices start at 26,900 euros for the electrified version, or 35,650 euros for the all-electric car.