Facebook Twitter LinkedIn Tumblr Pinterest Reddit VKontakte Odnoklassniki Pocket
With the EV9 concept, Kia is providing a concrete preview of its next electric SUV, which – like the Kia EV6 and the Hyundai Ioniq 5 already presented – will be based on the E-GMP platform. The target range of the EV9 is around 500 kilometers.

800 volt fast charging technology will be on board as standard due to the modern substructure. According to Kia, the production version of the EV9 will come onto the market in the second half of 2023.

The EV9 is currently still on the road as a heavily camouflaged Erlkönig before dropping its covers in the first quarter of 2023. But before the SUV can roll to the dealers, there are still a few tests to be carried out.

The vehicle, which has been in development for 44 months, is currently undergoing demanding tests in Namyang, South Korea. In the last test phase, the off-road suitability of the EV9 is put to the test, its climbing properties, as well as wading depth and bad road quality are tested.

On high-speed and handling courses as well as on low-friction surfaces, the focus is then on performance and road holding. The EV9 then has to prove its comfort and build quality on unforgiving cobblestones. Sounds promising, and the AUTO BILD test will later show whether all the tests have been successful.

The EV6’s big brother will be a full-size SUV that’s almost five meters (4.93 meters) long. The EV9 Concept relies on a beefy and angular design. The wheel arches are flared, the front is steep. The entire vehicle makes a bulky impression and with its width of around 2.06 meters gives an indication that it is tailored more to the US market than to the European one. 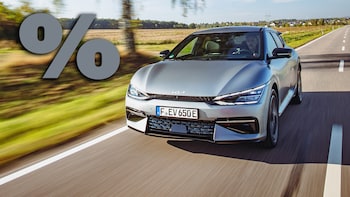 Buy the Kia EV6 with a discount at carwow.de

Unlike the EV6, Kia has included the brand-typical “Tigernose” grille in the design more concisely, even if the electric car only has a real cooling air intake in the apron. On the closed front, which is painted in the vehicle color, this element is stylized with decorative strips, beads and edges. The headlights have an unusual design in the study: a vertical light strip and many small light elements imitate the outlines. For the production model, however, we expect a more conventional variant.

The rear lights, on the other hand, could – in a slightly modified form – go into series production. They reach far up and down along the rear window and trunk lid. The rear is completed by a massive, silver-colored underride guard.

Almost typical for a study, the EV9 has cameras instead of exterior mirrors, which are protected by a square cover. The roof rails can be extended – this reduces air resistance when you don’t need them.

Dimensions: This is how big the Kia EV9 Concept is

As is so often the case with current show cars, the interior is designed like a lounge, reduced to the essentials and brightly designed. Even if we are not allowed to enter the study, you can see the advantages of a 3.10 meter wheelbase and a modern e-platform with the naked eye: airy feeling of space, flat floor, six seats.

In the series there will probably be seven seats, but they will probably be shaped a little less futuristically. And maybe the 27-inch display will make it into the final EV9. Or the nice details like the glass roof, which can be darkened like self-tinting sunglasses.

The EV9 will be based on the E-GMP platform, including 800-volt technology, on which the EV6 and Ioniq 5 are also based. A solar module below the windshield is said to provide a few additional watt hours. There are no specific details on the performance yet, but the platform is said to support up to 600 hp enable. That would be the planned performance: Kia specifies a time of around five seconds for the standard sprint.
Aside from the pure driving performance, the Koreans have already announced that the EV9 will be the first Kia that can drive autonomously after Level 3 and allow update purchases via the infotainment.