Facebook Twitter LinkedIn Tumblr Pinterest Reddit VKontakte Odnoklassniki Pocket
Kia has presented the new Niro. The SUV gets a completely new, angular look and a modern, reduced interior with large displays and sustainable materials. As with its predecessor, there is a choice of three drives: a hybrid, a plug-in hybrid and a fully electric version. Kia does not currently name any technical data.

Market launch and price: the new edition is likely to be more expensive

The new Kia Niro will roll into dealerships in 2022. Because of the extensive changes, prices are likely to rise. The hybrid is currently available from 27,490 euros, the plug-in hybrid costs at least 34,190 euros, and the e-Niro starts at 38,290 euros. 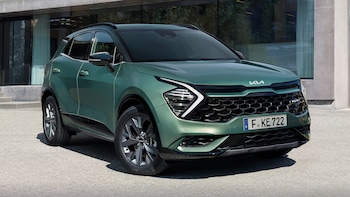 At carwow.de there are inexpensive new cars, including many Kia models.

The design of the new edition is clearly based on the Habaniro show car shown in 2019. The new Niro retains its basic shape, but is much more angular than the current model. With its various parallel lines, the front appears calmer and bolder. very unconventional is the one Design of the headlights. The daytime running lights are a stylized version of the human heartbeat curve, the “heartbeat” signature. Above that, high beam, low beam and indicators are arranged. Depending on the drive and equipment, the typical tigernose grill is indicated by a chrome strut below the bonnet or it is narrowed to a narrow slot. The lower air inlet grows upwards, towards the street it is closed off by a silver-colored element, which in turn takes up the tigernose design.

While the predecessor had the classic SUV paneling on the wheel arches and sills, the new wheel arches and the lower areas of the doors are protected from bumps and scratches. the Very wide C-pillar in a contrasting color optically merges into the planking of the rear wheels. At the rear, it is noticeable that the window looks even narrower than its predecessor. She gets sideways from new ones boomerang-shaped taillights flanked. The reversing light and rear fog light are located in the apron with a large underride protection element. The license plate moves up and is now housed on the tailgate.

Interior: Niro seems to have largely taken over the EV6 cockpit

The interior of the stainless steel is also changing significantly, with the overall design reminiscent of the EV6 electric car. The Niro is also getting a new, continuous screen. Kia has not yet commented on the size, but it can be assumed that the SUV as well as the new Sportage will two 12.3 inch screens side by side for speedometer and infotainment takes over. This probably also applies to the software, which means that it is always online, provides real-time information and can be updated wirelessly. The steering wheel and the digital control unit for the air conditioning also seem to have been taken over directly from the brand brother. The design of the center console has been modified somewhat, but just as reduced. Instead of the bulky automatic selector lever of the predecessor, a rotary wheel is now used to select the speed levels.
A wide variety of recycled materials are used. The headliner is made of processed wallpaper, the seat covers are made of organic synthetic leather and processed eucalyptus leaves. The paint on the door panels comes without so-called BTX aromatics, which are certain environmentally harmful solvents.

Drives: Hybrids are given a new function

Like its predecessor, the Kia will not only be available as a fully electric e-stainless steel, but still with hybrid drive as a full hybrid and a plug-in hybrid. However, the brand has not yet revealed whether there will be any changes to the drives. In the case of hybrid with plug and pure electric cars, in particular, larger batteries could provide more electric range. Currently, the plug-in hybrid is 58 kilometers, the e-Niro covers 289 to 455 kilometers, depending on the battery. But it is official that the hybrids are equipped with a new function, the automatically switches to pure electric drive at certain locations. The data is provided by the navigation system and driving habits. The so-called “Greenzone Drive Mode” is activated, for example, in the vicinity of hospitals, schools and kindergartens, but also in places that are frequently visited, such as the driver’s home or workplace.