Market launch and price: fresh XCeed in stores from September 2022

The Kia XCeed has been on our streets since 2019, and with over 120,000 units sold, it is the most popular model within the Ceed family. A comprehensive facelift is now in the starting blocks for the coming model year – the fresh XCeed will be in dealerships from September 2022. 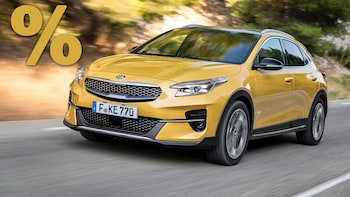 Buy the Kia XCeed with a discount at carwow.de.

Kia has not yet commented on the prices. It currently starts at 22,690 euros for the “Edition 7”, higher equipment such as “Spirit” is available from 29,430 euros.

Design and dimensions: sportier look and for the first time as a GT-Line

Let’s start at the front. The most noticeable changes there are the new grille and the freshly designed front apron with new air intakes. The LED fog lights have migrated to the main headlights (also with full LED technology); This frees up space for so-called air curtains, which direct air from the front to the wheels and are intended to improve aerodynamics.

At the rear, the sporty look is expressed above all with a new diffuser, while the LED taillights with their slim signature set a high-tech accent. The relatively long bonnet contributes to the sporty look in the side view of the XCeed. The roof line, which drops sharply towards the rear, underlines the coupé line of the XCeed.

With the fresh XCeed there will also be a sportier GT line for the first time: a sharper radiator grille and other accents in dark chrome underline the offensive look of this variant. Particularly characteristic features are the honeycomb LED taillights and the rear diffuser in body color.

Nothing has changed in terms of dimensions, with a length of almost 4.4 meters the XCeed drives between Ceed and Sportage, and at a good 1.48 meters in height, it is 36 millimeters higher than its compact offshoot. At 2.65 meters, the wheelbase is just as long as that of the Ceed. Up to 426 liters fit into the luggage compartment of the XCeed. If you put the back seat down (possible in a 40:20:40 ratio), then even 1378 liters go into the trunk.

Interior: new assistants in the XCeed

The interior presents itself with the same modern architecture as used in the other Ceed variants. Your gaze wanders to the free-standing central touch display, which is inclined towards the driver; including classic knobs and knobs for the audio system and climate controls. In the GT line with a black sky and sports seats, the XCeed is particularly sporty.

The display of the central screen can be adapted to the selected driving mode, depending on the equipment there are new graphic variants. There are also new assistants such as a drowsiness and cross-traffic warning. Other little helpers such as a front collision warning system with pedestrian and bicycle detection are also on board.

Engines: up to 204 hp in the fresh XCeed

There are no surprises under the hood, five drive variants will be available from September 2022. These include three petrol engines, one diesel with a mild hybrid system and one plug-in hybrid.

A one-liter three-cylinder petrol engine with 120 makes the start hp and six-speed manual transmission. The 1.5-liter engine offers a little more, here 160 hp from four cylinders to the front wheels. The top petrol engine is the 1.6-liter unit with 204 hpthe Koreans do the standard sprint to 100 km/h in 7.5 seconds.

The diesel is a four-cylinder with a displacement of 1.6 liters – 136 hp and a maximum of 280 Nm propel the crossover forward. And Kia also has a plug-in hybrid in its range, with a 105 working here hp powerful 1.6-liter four-cylinder naturally aspirated engine and an electric motor with 61 hp (44.5 kW) together, the system output is 141 hp specified. Nissan Qashqai 1.5 VC-T e-Power in the test: electricity from petrol