NASA released two exceptional documents on Monday captured by its Perseverance rover on the red planet. A spectacular video of his landing recorded from all angles, and the sound of a gust of Martian wind.

NASA released two exceptional documents on Monday captured by its Perseverance rover on the red planet. A spectacular video of his landing recorded from all angles, and the sound of a gust of Martian wind.

(AFP) – Perseverance, whose mission is to find evidence of ancient life on Mars, landed last week, the first stage of a journey of at least two years during which it will take samples that will have to be brought back to Earth by a subsequent mission to be analyzed.

Just over three minutes long, the video extract published by the American space agency reveals the images of several cameras located at different places on the module, after its entry into the Martian atmosphere. One shows the deployment of the supersonic parachute, another, located under the rover, the Martian soil approaching, and two views capture the rover gradually deposited on the ground, suspended by three cables from the descent stage.

“This is the first time that we have been able to capture an event such as a landing on Mars,” Michael Watkins, director of the legendary Jet Propulsion Laboratory where the rover was built, told a press conference. “It’s really fantastic.” The rover was protected by a heat shield as it entered the atmosphere at a speed of 20,000 km / h, which marks the start of the “seven minutes of terror” to the ground. We can see this shield dropped on the surface of Mars on the video.

Eight retro-rockets then finished slowing the vehicle, and Martian dust is propelled in large quantities under their effect. Once the rover is stationary, we can also see the descent stage perform a final push in order to crash 700 meters further. “These images and videos are what we have dreamed of for years,” said Allen Chen, in charge of the landing phase for NASA. 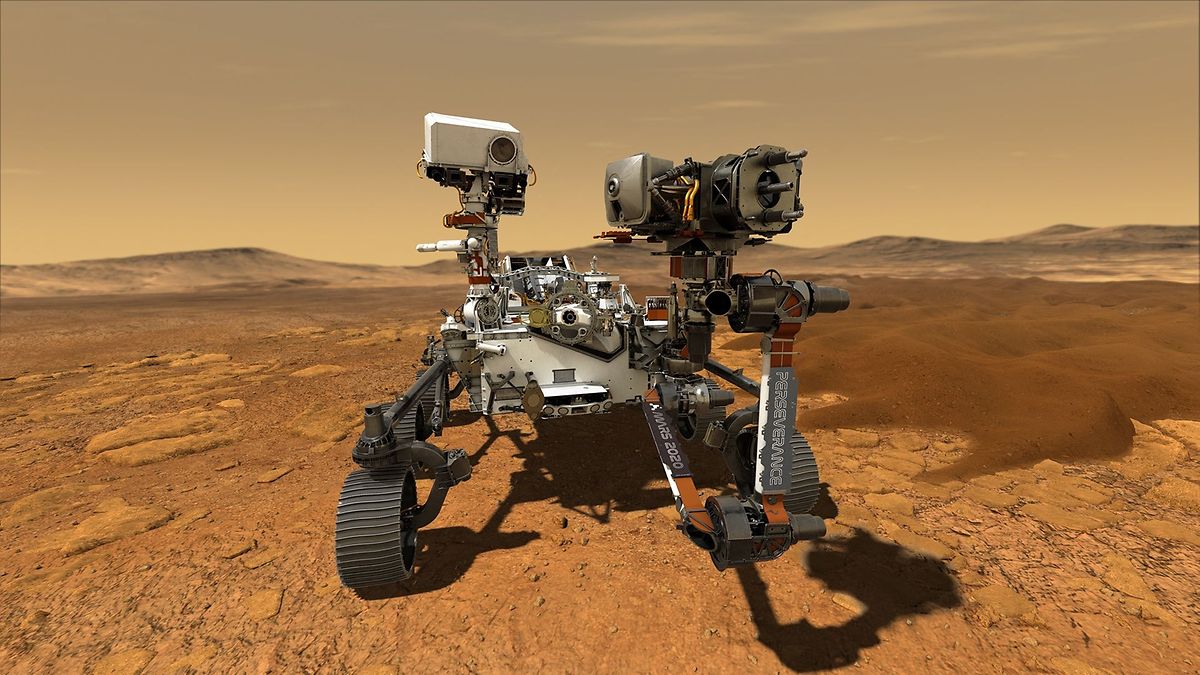 In addition to being able to show the general public what such an ultra perilous maneuver looks like in real life, these images will allow NASA teams to better analyze what is happening at each stage for future landings. NASA also hoped it could capture the sound of the dizzying descent, but that didn’t work. An extraordinary audio, recorded once the rover landed on the surface of the red planet, was however unveiled. In the clip, we can hear a shrill sound produced by the rover, but also, clearly, the Martian wind.

“Yes, you have just heard a gust of wind on the surface of Mars, captured by the microphone and sent back to Earth”, declared Dave Gruel, in charge of this equipment for NASA. These are “the first sounds recorded on the surface of Mars,” he added. The space agency also made hear the same sound but with the noise of the rover attenuated. Perseverance took home two microphones, one of which is located on the SuperCam science instrument, an ultra-sophisticated shoebox-sized camera. This can be used in particular to analyze the noise produced when the laser of the SuperCam, designed by the French, hits the rock.

“We are hopeful that we can continue to use these microphones to capture sound,” said Dave Gruel, although their life expectancy is limited due to the extreme temperatures on Mars. “Perseverance is healthy,” said Jessica Samuels, who heads operations on the Martian surface. “We have executed 5,000 orders,” she detailed. “All of our instruments have passed their initial verification tests and we are happy to report that they are all performing as expected.” In the coming days, Perseverance will move for the first time, and then testing will continue.

The landing site, Jezero Crater, was the riskiest ever, due to its topography. But it is very interesting for scientists, because it contained, according to them, about 3.5 billion years ago, a deep lake into which a river flowed.

all about the new generation electric SUV

March 12, 2021
Check Also
Close
Featured Posts
Tesla allegedly charged twice the price of a car to its customers
1 week ago