Nmechatronics from the chapter: Old car with new technology! The Mercedes specialist from near Stuttgart is working on another model, the Project 107. The first official Erlkönig pictures show a heavily camouflaged Mercedes SLC with a large brake system. A modern V8 could be under the hood!

The successor to the pagoda was built for a total of over 18 years (1971 to 1989) and was extremely successful. The coupé with an extended wheelbase and rear seats was offered between 1971 and 1981 and even had several successes in rallying. Among other things, a one-two at the Bandama Rally 1980, whereupon Mercedes withdrew from rallying. And now mechatronics is coming around the corner and planting modern technology in the popular Mercedes classic!

A large brake system is clearly visible behind the black rims.

But who is mechatronics? The company was founded in 1997 and has developed over the years from a three-man workshop to a renowned specialist company for Mercedes models of all years. In addition to restoring classic cars such as the 300 SL or 540 K, selling the rarest Mercedes such as the CLK-GTR, SLR Stirling Moss and more, Mechatronik also develops its own prototypes. Just like the Project 107.

Under the New Tech division, the engineers transplant modern technology into classic Mercedes. Sounds simple at first, but is extremely complex and is done by meticulous manual work. So far, there are two models: the M-Coupé / M-Cabrio, a W 111 with V8 (M 113) in two power levels (306 or 360 PS) and the M-SL based on the Pagoda, which is also mentioned with the M 113 V8 (4.3-liter displacement and 279 hp). In addition to the engine replacement, the complete conversion also includes a chassis that is adapted to the performance, larger brakes and even retrofitting of ABS and ASR. Despite this state-of-the-art technology, the classic look is retained, so that the models in the New Tech series look original at first glance. 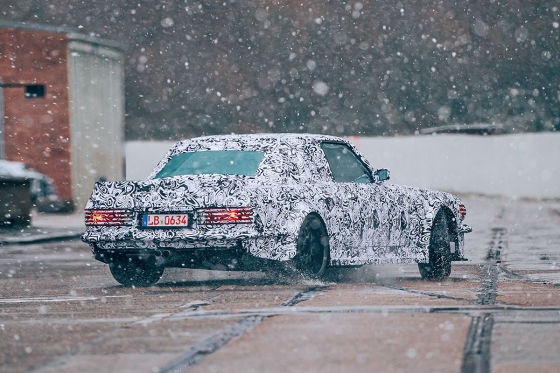 Drifting is apparently not a problem with the latest creation of mechatronics.

From In summer 2021, the Project SL Mercedes SL / SLC will be available as another model of the New Tech Series. Unfortunately there are no details yet. However, it can be assumed that the latest project will also use a V8. The Erlkönig pictures published by Mechatronik look promising. Despite the camouflage film, it can be seen that the SLC is growing in width. The aprons also appear to have been modified and a large braking system peeps out from behind the AMG rims. Mechatronics has promised more detailed details for the end of 2020. Then the price will probably be known and in all likelihood it will be violent. As a guideline: Prices for the elaborately handcrafted M-Coupé start at around 400,000 euros and, depending on special requests, can become even more expensive. Each model is absolutely unique!

Android 11: These smartphones receive the update

In times of corona, Airbnb is introducing new cleaning rules

Electro-Mob alerts on the subscription trap

False report about the death of Tesla boss: Blog sees person or group at work on Twitter

the electric SUV always on top!

7 great vegetarian (n) recipes that will make you hungry

RIVM asks to share experiences with copper IUDs
1 hour ago