Facebook Twitter LinkedIn Tumblr Pinterest Reddit VKontakte Odnoklassniki Pocket
Now it’s getting really fat. While everyone has to tighten their belts, they hit Mercedes again. 5.13 meters long, weighs 2.8 tons and has 544 hp. Didn’t they hear the shot? In fact, given the massive numbers that the new EQS SUV throws around, swallow first. On closer inspection, however, the electro-lulatsch becomes sympathetic. 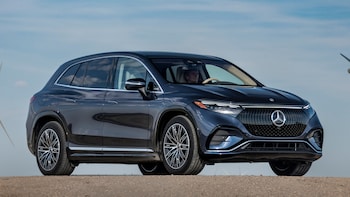 As the brother of the sedan, the new model follows the Mercedes EQ design language: large, closed radiator, A-pillars that protrude far forward, a huge wheelbase of 3.21 meters and flowing, self-contained forms that subordinate everything to perfect aerodynamics.

To the sedan that comes with a cwvalue of 0.20 is world champion, an SUV cannot match it due to its design, but a value of 0.26 is still an announcement. For comparison: in 1989, the Opel Calibra was world champion with the same value – compared to the huge Benz SUV, that’s a rolling chock.

There’s a lot of space in the EQS SUV

The “purpose design” also creates a lot of space inside. Princely space in front and behind make the EQS SUV the perfect travel glider for the whole family. If desired, two additional full-fledged seats fold out of the floor in the trunk.

And otherwise the trunk lacks any relationship to the rather narrow sedan. Depending on the position of the bench, 645 to 2100 liters can be stowed away in the five-seater. In the seven-seater it is still 565 by 2020. Only with full seating do the remaining 195 liters suggest a trailer.

one electric motor each at the front and rear

But there it is again, the hook with the hook. The “simple” EQS 450 SUV with rear-wheel drive is only allowed to pull a miserable 750 kilograms. A joke. The four-wheel drive versions allow a decent 1.8 tons for an electric car. All boat and horse owners still have to use the G and GLS combustion engines to get the 3.5 tons that are befitting in this class.

The acceleration is insane

You also get used to the other amenities. The huge “hyperscreen”, which is 1.41 meters long and houses the two outer 12.3-inch screens and the 17.7-inch central monitor, was created in the zero-layer operating logic, according to which there is always only one for all important functions Pressing a button should suffice, again improved.

The front passenger display now also shows moving images. However, if the driver looks over too often, the demonstration ends automatically – the camera sees everything.

The rear-wheel steering, with which the EQS virtually turns into parking spaces, turns out to be an ideal extra. The turning circle shrinks from 11.9 to eleven meters.

The EQS is a long-distance pro

Depending on how you drive, you should be able to travel up to 600 kilometers, the 108.4 kWh battery can be charged to 80 percent in 31 minutes with up to 210 kW charging current.

And that’s a good thing, because the EQS is a long-distance pro. Thanks to the standard air suspension, the EQS eats up the kilometers silently, floating effortlessly along. The fact that it can also be really dynamic if you want it – that’s a gift. It is the perfect glider that, with its sheer torque, makes even the last combustion engine friend ponder.

When driving, the EQS is whisper-quiet

Also because they have taken great care at Mercedes to eliminate the other sources of noise. Thickly lined wheelhouses swallow every stone, slim joints lock out wind noise. In addition, he rolls quietly and as if on velvet paws.

The work was worth it, even at recommended speed it is quieter inside than in a cathedral. And if necessary, it can even climb the steepest slopes thanks to the intelligent 4Matic drive.

The prices are going to get tough

Police warn of fake SMS from the Federal Ministry of Finance