You didn’t even notice at first glance that it was the new GLC? This is actually the intention, and there is a good reason for it: the registration statistics. Because in 202 alone, Mercedes brought 33,719 units of the compact SUV onto our roads, which accounts for 15 percent of all Mercedes vehicles in Germany. 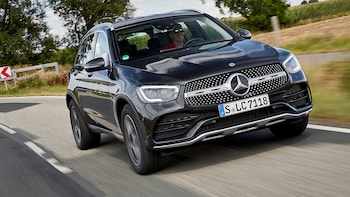 Mercedes GLC with a discount at carwow.de

For this reason, the Swabians decided on the motto: design evolution, rest revolution. And the thing about evolution is quickly explained on the GLC. Mercedes gave the GLC six centimeters more exterior length, which the wheelbase and overhangs share fraternally.

Visually, the Benz now comes as standard with the “Avantgarde” equipment, many chrome elements such as the indicated underride protection and window surrounds are now standard.

The most striking innovation at the front are the new headlights, which are now narrower towards the middle and run into the radiator grille. Depending on the equipment line, the grill also has a different shape.

In the “Avantgarde” line it is more classic and framed with chrome, the sportier “AMG line” has a matching grille that is pulled down to the outside and other bumpers.

At first glance, little has happened on the side. In addition to the window line that rises slightly towards the rear, there are new rims that are available in sizes between 18 and 20 inches.

Rear-axle steering with 4.5 degrees can be ordered as an option for the GLC, which should significantly reduce the turning circle. The two-piece taillights have a three-dimensional lighting design, and a black trim element underscores the width of the rear.

Interior: The legroom in the GLC has increased

The new Mercedes GLC with the factory code X 254 uses the MRA2 platform of the new C-Class and offers improvements in all areas compared to its predecessor. Customers want more space, so they get an extra two inches, which also means more legroom. Visually, too, much is reminiscent of the mid-size sedan. AUTO BILD was already allowed to take a seat.

Even in series production, the new GLC comes in the “Avantgarde” equipment line, which can be recognized by the ventilation nozzles, which are reminiscent of the engine nacelles of an airplane.

As with the C-Class, the free-standing, 12.3-inch digital cockpit is located directly in front of the driver in the GLC. The central display is also slightly tilted towards the driver and measures 11.9 inches.

The latest generation of MBUX is of course on board. And this technology sets standards: firstly because the ergonomics are right, secondly because the icons are huge and you can operate them intuitively while driving. Third, the voice control is excellent.

Up to 600 liters of storage space in the trunk

And the space is just right: Not only do passengers have enough space in the front on the comfortable seats of the AMG-Line, they can also sit comfortably in the rear thanks to sufficient legroom.

They want more trunk space, so they get 50 liters more, now 600 liters. With the hybrids, however, a few liters of storage space had to give way to the larger battery. The battery has grown from 12.8 to over 32.2 kWh, so the luggage compartment “only” swallows 463 liters.

But now we’re on the road. The petrol engine with 258 hp and the diesel with 197 hp were available for the first test drives. Both start remarkably softly, the petrol engine then puts in a lot of effort, is lively, and at higher speeds it also becomes rough to pithy.

As always, the diesel sounds very familiar to diesel engines, remains calm and rested, pulls through sturdily. And it works well with the nine-speed automatic. With the petrol engine, it sometimes seems a bit nervous and takes a little longer to sort through the gears.

The GLC is handier and more agile than its predecessor

The GLC sits firmly on the road, is pleasantly comfortable to drive, is well insulated and overall more manoeuvrable and agile than before. At the start there are the petrol and diesel engines, the plug-in hybrids will follow in the fall.

When it comes to the engines, Mercedes relies on two-liter four-cylinder units, both for the petrol and diesel versions. There will be three combustion engines with a 48-volt electrical system, and the Swabians also have four plug-in hybrids in their range.

The GLC 200 will start with 204 hp, the entry-level diesel will be the 220 d with 197 hp. All-wheel drive is standard on all models. There are three variants of the plug-in hybrids, one with a diesel engine. The petrol hybrids start with the GLC 300 e, which transmits up to 313 hp of system power to all four wheels, and the larger GLC 400 e even has up to 381 hp.

Consumption according to WLTP*

Electric range according to WLTP*

With a system output of 333 hp, the diesel hybrid is positioned between the electrified combustion engines. It completes the standard sprint to 100 km/h in 6.4 seconds, the GLC 400 e even needs just 5.7 seconds at country road speed.

The question remains of the prices. Currently, the GLC is only offered in the combustion engine versions, the entry is the GLC 200 with a base price of 57,632 euros, the current top gasoline engine GLC 300 costs at least 68,241 euros.