Presentation and design: the successor to the Citan will be significantly more valuable

Granted: the name Mercedes Citan station wagon sounds about as exciting as woodchip wallpaper – and the high-roof station wagon created in cooperation with Renault was just as exciting. The Kangoo offshoot was primarily aimed at traders who already drive the Vito and Sprinter and should also find something deeper on the shelf. The passenger version station wagon was considered a cheap but unattractive alternative to the B-Class. That is changing now. 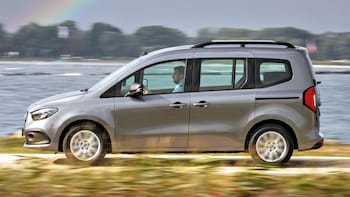 Get the best offers for the Mercedes Citan Tourer and save an average of €3849 compared to the RRP at carwow.de.

Nothing changes in the basic orientation with the new edition, but the Benz gets the new name T-Class and is also being launched for the first time as a purely electric EQT model.
Visually, the Swabian’s French relationship is no longer apparent at first glance. Mercedes couldn’t change anything about the bodywork, but the front and rear of the T-Class now looks like a Benz.

Interior: Up to 2127 liters of storage space in the T-Class

Swabian cosiness can now also be found in the interior. Mercedes instruments, Mercedes steering wheel, new infotainment with MBUX system are on board – and plenty of space. The four and a half meters initially accommodate five passengers, a version with a long wheelbase and seven seats will follow later.

The guests in the rear get in through two sliding doors, and instead of a tailgate, two classic doors can also be ordered.

The luggage compartment takes it up with 520 to 2127 liters; if you fold down the back seat, you get a flat loading floor. The 56 centimeter low loading sill is also practical; heavy objects can be loaded just as easily as any four-legged friends traveling with you. If there is not enough space in the trunk, up to 1500 kilograms can be hooked up.

Engines and prices: T-Class starts at just over 29,000 euros

In order to get friends, family and luggage easily from A to B, two petrol engines (102 and 131 hp), as well as two diesel engines (95 and 116 hp) offered, all come with four cylinders. In addition to the six-speed manual transmission, there’s an optional seven-speed double clutch for the diesel and top-of-the-line petrol engines.

The T-Class can be ordered now, and the first models will be delivered from July 2022. Mercedes specifies the base price for the high-roof station wagon as 29,314 euros for the T 160, the base diesel is available from 31,218 euros. If you opt for the automatic, you have to put at least 32,487 euros on the table for the T 180 “Edition”.

The prices at a glance:

Driving: This is how the T-Class performs in the first test (update!)

In their marketing speech, the Stuttgart-based company calls the T-Class a “premium small van”, but what does that mean? AUTO BILD clarifies that in the first test!

But let’s start from the back: Van stands for high-roof station wagon, and that can certainly be taken seriously. The Benz measures 1.81 meters in height, and even tall people have plenty of space over their heads in the interior. The T-Class is small because, at just 4.5 meters in length, it offers plenty of space in a relatively small area.

And Premium? The premium claim is already set at Mercedes, but is of particular importance here. As with the unofficial predecessor Citan Kombi, the Stuttgart-based company is working together with Renault, with the difference that nobody can tell the difference to the technology brother Kangoo. The relationship to the French can only be seen in the shape of the body, but the designers have also made an effort here.

Chassis and steering are convincing, engines are not very sporty

Inside there is a typical Mercedes atmosphere. Switches, instrument cluster, MBUX operating system – everything was trimmed to Swabian. But the difference between premium and luxury is evident in the T-Class. You won’t find fully digital instruments and XXL displays here, and the material quality is also not comparable to the C or E class.

But now we’re on the road. AUTO BILD was with the stronger diesel T 180 d on the move, which, as expected, does not make an athlete out of the T class. The 116th hp Strength engine Doesn’t exactly run smoothly, and anyone who has forgotten what turbo lag is will get to know it again despite the automatic. The sprint to 100 km/h isn’t exactly world-class with a good 13 seconds.

All in all, the diesel, which is sufficiently strong with 270 Nm, fits the cozy Mercedes image, which also underlines the steering and the chassis again. If you like it a little smoother, you can go to the T 180 petrol engine with 131 hp grab, which works much more cultivated. The all-electric EQT, which will be available at the end of 2022, promises much more driving fun.

Electrification is also progressing with Mercedes vans. At the end of 2022, the electric T-Class will also come to dealers with the EQT – with an estimated price in the upper 30,000 range, it should become an electric bargain.

However, the EQT is not compared to the EQA, which is around 10,000 euros more expensive, but is aimed at cars such as the Opel Combo-e and VW Caddy, which, by the way, it is neither plug-in hybrid still available as a fully electric version.
In this environment, the star with its 90 kW (122 hp) and 45 kWh battery (range approx. 300 kilometers) can keep up. And even as a pre-production model, it feels more confident and sublime than its competitors.

The EQT is much more agile than the combustion engines, recuperates so much at the sharpest level that you can almost completely do without the mechanical brake in everyday life. And the chassis also irons out bad roads sensitively.