A pioneer with a plug

This Mitsubishi can also be electric. 50,000 kilometers in the Outlander PHEV reveal strengths but also weaknesses.

EIt took Mitsubishi to take the Outlander plug-in hybrid in the AUTO BILD endurance test. The first generation was already offered in Europe in 2003, which was far ahead of its time. Plugin hybrid 17 years ago! Nevertheless, Mitsubishi landed a hit and showed that alternative car drives do not have to be in a strange shell. But it was only with the third generation, thanks to the environmental bonus and 0.5 percent company car tax, that sales success came. Mitsubishi already reports 54,382 new registrations in Germany. Overall, they have sold 91,632 Outlanders to us since the beginning. Of course, not just as a plug-in. Initially, the share of the cheaper petrol engine without a plug predominated. But in 2019, 64 percent opted for the plug-in variant.

Consumption and range are the biggest weaknesses

Clean engine compartment: Under the hood, nothing indicates the elaborate plug-in technology.

On April 15, 2019, the, well, not permanent, but annual test started. In brilliant mother-of-pearl white, with lavish furnishings. Cost: 49,990 euros. Another extra on the price list is a GPS for 600 euros. But you can save yourself that is lame, cumbersome, not competitive. So Mitsubishi decided to give the testers Apple CarPlay and Google Maps instead. Drive, space and driving behavior are more important. This brings us to the impressions that the Outlander left. He can convince with his background noise. No trace of the roar of the combustion engine when accelerating like a Toyota Prius. Discreet in tone and behavior, it switches discreetly when necessary. Very pleasant. Like all of the noise insulation. This is matched by the well-damped, yet firm chassis, of which 18-inch bumps only penetrate on lousy slopes. Overall, the tall white is also recommended as a relaxed touring car with comfortable seats and plenty of space inside. And it reveals its greatest weaknesses on the road: consumption and range. Electrically, Mitsubishi specifies that it can cover up to 54 kilometers. We did 50 kilometers at the start of the test, but still 45 a year later. Okay for an empty weight of almost two tons, but not overwhelming.

The is developed Outlander PHEV for speed-limited streets 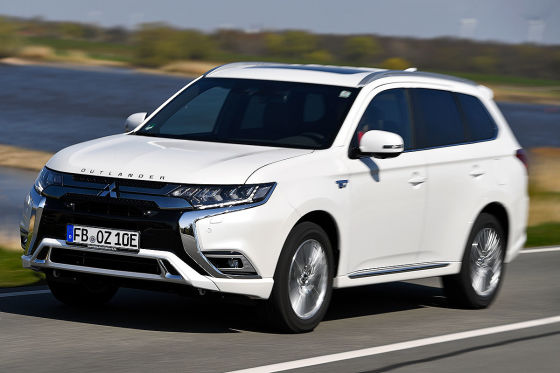 Cruise to 130 km / h and relax. Then consumption under nine liters is possible.

Tester Stefan Novitski locates the intended use as a “utility tractor for home and craftsmen without long-distance ambitions.” All others rely on the combustion engine at the end of the short electric route. But it is thirsty (9.8 liters super in the long-term test average, with sporty gait over 12 liters) – and the tank is small (43 liters). Nothing changes that Mitsubishi lets the gasoline engine work according to the Atkinson principle. Without going deep into engine technology, the gasoline engine should be curbed in terms of consumption and exhaust gas behavior. Which also robs him of performance. Conclusion by KLASSIK author Martin Puthz after 3000 kilometers: “The Outlander is economical only where I don’t need a heavy SUV with all-wheel drive, namely on short journeys in city mode.” You should understand this hybrid as its concept is designed: developed for speed-limited roads. Cruise to 130 km / h and relax. Then consumption under nine liters is possible. We tried: The three of us with lots of luggage from Munich to Hamburg, in many cars that would be a pain. The editors Branke and Klangwald as well as photographer Ruddies got out in Hamburg relaxed. Even in the back seat, the trip was not an ordeal. Two pit stops (small tank!) Were often used for coffee breaks.

There is nothing to complain about in terms of reliability

Relaxation with reliability too: zero problems. The team combustion engine plus two electric motors harmonize perfectly. There were also no complaints about the processing. It takes some getting used to the sometimes arbitrary arrangement and distribution of various switches in the cockpit. That leaves the cost side. Anyone who streams and recharges should expect just under 23 kW for 100 kilometers. Makes around 7.59 euros on the electricity bill. The gasoline engine costs around 12 euros for 100 kilometers with a tame gas foot. In the more researched gait it is rather 14 euros.

Conclusion by Manfred Klangwald: Mitsubishi has been building plug-in hybrid SUVs since 2003, which meant the Japanese were ahead of their time. The third generation is routine, easy and reliable. However, the pure e-range is no longer up-to-date, multimedia can do better.

Will Battlefield: Bad Company 3 be a launch title for the PS5?

the electric van in detail

Tesla gives power: 5 Supercharger locations opened in one day in a Chinese city

Formula 1: will this be the new Vettel helmet?

9 hours ago
Featured Posts
Midfielder Toornstra: Feyenoord was too anxious
15 mins ago

Midfielder Toornstra: Feyenoord was too anxious

Starting this week to stream: the start of Marvel series ‘WandaVision’, the third season of ‘Disenchantment’ and Oscar contender ‘One Night In Miami’
35 mins ago

Starting this week to stream: the start of Marvel series ‘WandaVision’, the third season of ‘Disenchantment’ and Oscar contender ‘One Night In Miami’

Police warns against fake agents’ accounts: ‘you must be able to trust us’
2 hours ago

Police warns against fake agents’ accounts: ‘you must be able to trust us’

‘EU wants to become less dependent on the dollar’