There are regions in Germany that you simply know. Either because you’ve been on vacation there before. Or because they are famous for their culinary products. In addition to these stars of tourism, there are many underestimated corners that you drive past without even knowing what you are missing. Just like the Hunsrück. Located between the travel hotspots Moselle and Rhine, one of the oldest low mountain ranges in Germany stretches out, which attracts nature lovers in particular with its well-developed hiking trails.

It’s mid-September. We chug comfortably with our historical companions through the hilly landscape in late summer. For this trip we exchanged our modern endurance test vehicles for a rare VW T2b Westfalia Champagner Edition. You can get the oldie at the AUTO BILD REISEMOBIL fundraising campaign of the Lebenshilfe Gießen registered association to win (see box below). On our tour, he proves that the elderly camper is still fully suitable for vacation. The goal: the BurgStadt CampingPark in Kastellaun, our base camp. 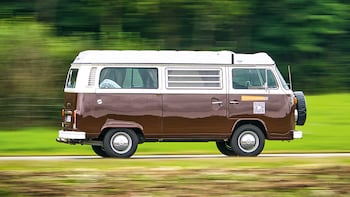 This is how you can take part in the raffle

Each transfer of at least 5 euros to the donation account Lebenshilfe Gießen eV, Sparkasse Gießen, IBAN: DE63 5135 0025 0205 0386 62, BIC: SKGIDE5FXXX serves as a ticket. Enter your name and address as reference. With your donation you support the children and family center “Sophie Scholl”.

What catches our eye as soon as we arrive are the countless castles from the Middle Ages that rise up along the idyllic country roads. There are around 60 of them in the Hunsrück. One of them is the Balduinseck hilltop castle between Buch and Mastershausen. It was built on a rocky outcrop in the 14th century by order of Archbishop Balduin von Trier, who gave its name. The magnificent Masdascher Burgherrenweg, which in turn is part of the multiple award-winning Saar-Hunsrück Climb, runs right by the castle.

Rhine route with many highlights

Another stage of this long-distance hiking route is the Geierlay loop, but hikers with a fear of heights should stay away from it. The highlight of the tour is certainly the most beautiful suspension rope bridge in Germany. History is omnipresent in the Hunsrück. Just a few kilometers from Balduinseck is another historical relic, but from a completely different time.

During the Cold War, the US military stationed nuclear missiles, among other things, at the former NATO base Pydna. This led to the residents joining forces in 1985 to form the largest peace movement in the history of the Hunsrück.

Today, Pydna is primarily known to fans of electronic music. Nature One, one of the largest electronic music festivals in Europe, has been celebrated on the site since 1995. By the way, psychedelic music of a completely different kind is said to have existed on the Rhine, which is only about 20 kilometers away from Kastellaun.

The legend of a beautiful siren, who, sitting on the rock, cast a spell over the boatmen on the Rhine with her singing, causing them to have an accident. The song by Heinrich Heine (“I don’t know what it’s supposed to mean…”) is primarily responsible for the fairy tale.

The fact is, however, that for a long time there were treacherous sandbanks and whirlpools in the Rhine at this point, to which many a ship fell victim.

From the Rhine we continue to the Moselle

While there is still a lot of shipping traffic on the Rhine in the east, things are much quieter on the Moselle. The region is not only a tourist magnet because of the wine. The grape juice is really good and has a long tradition in the region.

One person who knows more about this is winemaker Andreas Schlagkamp. His family is one of the oldest wine producers still in existence in Senheim. The family history of wine can be traced back to at least 1602. “Of course, 400 years ago it wasn’t a winery like it is today.

The house where the Schlagkamps sell wine today and where events also take place is also a museum. The walls are lined with over 10,000 exhibits from the history of winegrowing and the family. For more than 40 years, the Schlagkamps collected the pieces.

Grandfather Hans built the house on Zeller Strasse in Senheim. “Since there was no community center back then where the villagers could celebrate, he built one,” says Andreas Schlagkamp. “But of course my grandfather was smart. People were allowed to bring their food but had to buy his wine. There was an apartment upstairs that was rented to the village doctor. That gave the saying ‘party until the doctor comes’ a whole new meaning .” We also recommend the Elbling and the red vineyard peach liqueur, the fruit of which only grows on the Moselle. With the Bulli and wine in our luggage, we leisurely trundle north on the L 98 from place to place. The dream road leads directly along the Moselle between steep slopes overgrown with vines.

Here and there we discover an old castle ruin or a pretty campsite right on the shore. When we arrive in Beilstein, however, we have to step on the brakes. Have we ended up in the Middle Ages by time travel? The old town of the small town on the banks of the Moselle is so well preserved that it resembles an open-air museum.

Finally take off in the flight simulator

After the hustle and bustle of the Moselle, the quiet streets of the Hunsrück seem like a soothing oasis in the evening. The next morning, unfortunately, we sit at the breakfast table in the pouring rain. Doing something outside is canceled today.

Heiko Stemmler, owner of BurgStadt CampingPark, has the redeeming idea: he’ll just take us to Hong Kong for a moment. And before we know it, we’re sitting in a Boeing 737 and watching Heiko approaching the Chinese metropolis. The campsite operator is also a passionate pilot and has built an absolutely realistic flight simulator where his guests can take their first flying lessons.

On his recommendation we also stop by Shop-doch in Kastellaun that day. Christian Lauer and Markus Faber run a special kind of Petromax store here. In addition to Dutch Oven and Co, they sell their own collection of spices for the outdoor kitchen with euphonious names such as “Borstenvieh” – a delicious souvenir. Add to that a glass of Elbling and your holiday for the heart is complete.

Fraud: New attack on bank customers with a 4999 euro transfer