Market launch and price: Cooperation with Ford could make the pick-up cheaper

away In 2022, VW wants to stir up the pick-up market with a new Amarok. The successor is to be developed in cooperation with Ford and will probably share a platform with the Ranger. On the one hand, this saves costs, the new Amarok could less than 35,000 euros start. On the other hand, it would also enable an off-road-oriented top model, such as that offered by Ford in the Ranger with the Raptor.

VW has been teasing the Amarok since 2020, and the latest sketches also give us a first impression of the interior. It takes over an important element from the recently introduced new Ranger: the portrait display. This begs the question of whether the Amarok will also take over the Ford software or whether it will get VW’s MIB system. There are hints in both directions: The displays on the digital speedometer are designed in the typical VW manner in the sketch, but the climate control unit under the central display is equipped with buttons like the Ranger. That doesn’t really exist anymore with the Wolfsburgers. However, there are also some of its own elements to the Amarok. The design of the center console looks less sleek than the Ford, the steering wheel is typically VW and the design of the dashboard and door panels are different.

From the outside no relabeled ranger

Sketch number two shows the outside of the pick-up. Compared to the previous teasers, it looks less angular and fits better into the model range. As before, however, the extremely wide wheel arches that barely cover the even wider track are retained. Otherwise the optics are less based on the Ranger than expected, VW’s current design language can be clearly seen. Compared to its predecessor, this primarily means narrower headlights with a new light signature, which are connected on the teaser image by an LED strip. As usual, this feature will only be available later for the higher equipment. The newly designed grill emphasizes the width of the car. The VW apparently retains the bar on the loading area in the new generation. The illustration suggests that the next Amarok will be less rounded than its predecessor. (The VW Amarok in the AUTO BILD used car test.) 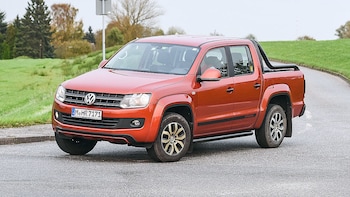 As usual, the Amarok should be on one Ladder frame stand. The pick-up will probably be back in different cabin variants as well as with Rear or four wheel drive to be had. The Wolfsburg pick-up will probably share the engines with the next generation of Ranger. So far, only diesel, two four-cylinder and one V6 have been announced, the performance data of which have not yet been announced. According to the “Carsales” portal, it will be the next Amarok no electrification give, even a mild hybrid is excluded.

In return, the Ranger base would provide an opportunity for a cool top model. Ford sells a hot Raptor version of the current Ranger in Europe. Should the successor get one too, an extra-powerful Amarok R would actually be an option for VW – with a higher chassis and 300 hp diesel. It is highly unlikely that the Amarok R will actually become a reality. The sketch would be worthy of an Amarok R.