Facebook Twitter LinkedIn Tumblr Pinterest Reddit VKontakte Odnoklassniki Pocket
The Opel Crossland X followed the Meriva – as the first Opel on Peugeot / Citroën-Technical platform. Variable and inexpensive, but with quirks at the first HU. The most important information for used car buyers from the AUTO BILD TÜV report! 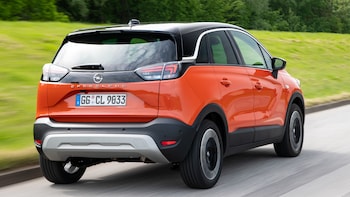 That’s him: the Successor to the Meriva in SUV instead of van optics, a size smaller than the mocha and only available with front-wheel drive. the Crossland X came in 2017 as the first to be created under the aegis of PPE Opel; Peugeot 2008 and Citroën C3 Aircross use the same platform. It is built in Spain. There is a choice of a 1.2-liter three-cylinder petrol engine (initially 81, then 83, 110 or 130 hp), a 1.6-liter diesel (99-120 hp) by mid-2018, then a 1.5 -Liter diesel (102-120 hp). The top versions of diesel and petrol can each be ordered with a six-speed automatic. dieselCrossland are difficult to find; the drum-like petrol engine clearly dominates the buyers’ favor. Since the facelift in autumn 2020 the “X“in the model name.
He can do that: There is a lot of space on the modest footprint of 4.21 x 1.77 meters – not as consistent as the one Meriva, but an acceptable successor. Those who like to sit high are not served badly. Likewise, those who value a lot of payload and variability – The back seat can be tilted and moved lengthways, there is a compartment for the hat rack, a bike fits in after the front wheel has been removed. Fans of modern assistance systems and fuel-saving technology will not get their money’s worth – the technical basis is no longer the youngest. At least a head-up display can be ordered. The rumble-tight chassis, the less precise gearshift and an equally imprecise steering reduce the driving pleasure. But you sit well in the front, especially on the AGR seats, an extra charge.

That causes trouble: At first there was isolated electrical problems and strut dome bearings that wear out too quickly. The choice of material corresponds to the low price. The Federal Motor Transport Authority recorded a recall due to abrasion damage to the cable harness.

Opel Crossland X with savings of up to 5320 euros at carwow.de

landing gearAxle suspensions slightly better than average, drive shafts and steering system also without any abnormalities. An unmistakable weak point are axle springs / damping, which, despite the small age of the vehicles, are often more negative than average.

lightThe front lighting is criticized more often than average during the main inspection. Rear lighting and indicators have not caused any problems so far.

BrakesNot a glory sheet of this model from the Groupe PSA, which today belongs to the branched Stellantis group. The TÜV inspectors criticize the brake discs far more often than the average of this age group. The foot brake works average, the brake lines and hoses have remained tight until now. The parking brake even holds out well above average.

environment The TÜV has already complained about oil loss in isolated cases – the oldest are among them Crossland X only four years old. So far, there has been little trouble with the exhaust system and the AU.

Formula 1: FIA President does not believe in Hamilton’s resignation