Facebook Twitter LinkedIn Tumblr Pinterest Reddit VKontakte Odnoklassniki Pocket
Practical station wagons with economical diesel engines and that certain something are a specialty of Peugeot. It all started in 1970, when the Germans were still driving Beetles. With the 304 Break. At that time, a 45 hp diesel engine had to work really hard to keep the 4.14 meter pack donkey going. 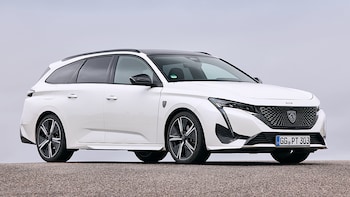 The French’s latest everyday combination is called the 308 SW and comes with a compression-ignition engine and at least 130 hp. However, there is not much left of the pragmatism of the past. With dynamic lines and a perfectly integrated rear with horizontal lights, the SW looks like it was made of one piece. The front with the narrow headlights and the large snapdragon exudes self-confidence. The matter-of-fact, somewhat well-behaved aura that often surrounds compact station wagons, he confidently counters with Francophile elegance.

With the payload it should be quiet more

With so much publicity, does the practical benefit come under the wheels? Let’s start right at the rear. Opposite of limousine the SW has grown by 27 centimeters and holds between 608 and 1634 liters depending on the position of the unfortunately only two-part rear seat. That’s decent, but only average in this class. At Octavia, Golf and Focus, you can always easily add an extra case of Merlot. Even more annoying, however, is the relatively low payload of 450 kilograms.

If you go to Provence on your summer vacation, your family and luggage have to be weighed in advance. If all else fails, he can still hook up to 1.5 tons. In row two, the flat roof line takes revenge when you get in – if you don’t pull in your beet far, you risk a headache. The seating comfort in the back is okay, in front the large and well-formed GT seats spoil you. Although the soft cheeks do not offer the lateral support that they promise, driving fast is not in the nature of the 308 anyway.

The 1.5 liter diesel has a calm disposition. In combination with the equipment GT It comes with an Aisin eight-speed automatic transmission as standard. A convincing team. the four-cylinder balances its 300 Nm at 1750 revolutions on the crankshaft, the attentive automatic thanks it with high gears for a low speed and noise level.

The drive is skilfully arranged with the comfortable chassis, which only chokes on short bumps, and the pleasant, if somewhat lacking in feedback, steering. A successful composition, the next holiday tour can come.
Especially since the travel budget is spared. In the test, 5.5 liters were enough, moving quietly over the country road is just over four. With the Range of 960 kilometers he masters the route between Hamburg andParis non-stop. We only have to swallow at the price. At least 38,900 euros as a GT, at least 30,950 euros for the manual Active Pack. A lot for a compact station wagon. It used to be different at Peugeot.