Facebook Twitter LinkedIn Tumblr Pinterest Reddit VKontakte Odnoklassniki Pocket
Peugeot is expanding its model range with the 408. The new series is based on the compact 308 and is expressly not intended to be an SUV coupe – despite the lift, unpainted plastic wheel arches and flowing roof line. Instead, the French want the 408 to be understood as a newly conceived sedan – i.e. as a crossover. 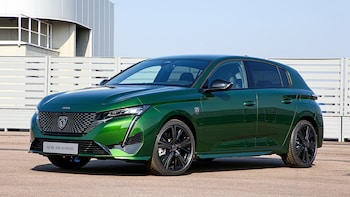 Buy a Peugeot 308 at a discount at carwow.de

The 408 will roll off the assembly line in Mulhouse, France, by the end of 2022 and will be in dealerships by January 2023. It will initially be available as a petrol engine and in two plug-in hybrid variants, with a purely electric version to follow later. The prices for the 408 have not yet been determined, but they should start at around 35,000 euros. (Overview: all new cars 2022)

The new 408 is based on the EMP2 platform, just like the compact 308 and the SUV 3008. However, at 4.69 meters it is significantly longer than its two siblings (308: 4.36 m /3008: 4.45 m).
Nevertheless, Peugeot sorts the 408 in the model range between 308 and 3008 or 508. The name also makes that clear: numerically between compact and sedan and without a central double zero – which is reserved for SUVs at Peugeot.
The 408 is aimed at people who want to drive a stylish car with an extra shot of versatility, but still don’t want to own an SUV or a classic sedan. To make things even more complex, Peugeot already sells a compact sedan called the 408 in China, so the new crossover will be called the 408 X there.

Optically many bonds from the 308

The 408 is deliberately dynamic, which is mainly due to the enormously long greenhouse and the beefy rear with a large spoiler lip. Unpainted plastic on the wheel arches, sills and parts of the aprons as well as the increased ground clearance of 19 centimeters ensure a shot of robustness in the look. However, the relationship to the 308 always remains clear.

The front of the 408 is also characterized by flat LED headlights (optional matrix LED) with the typical Peugeot fang daytime running lights. The new Peugeot logo is emblazoned in the middle, behind which the sensors for the driving assistants are hidden.

With the top equipment line “GT” The inserts of the radiator grille are painted in the vehicle color, the aprons have a sportier design. The “Allure” and “Allure Pack” equipment features more restrained aprons and a differently designed grille with a chrome look.

The extremely eye-catching 20-inch rims, which are optionally available for the plug-in hybrid models, have nothing to do with restraint. Depending on the equipment, more conventional 17 or 19-inch rims are standard.

The cockpit takes over the 408 one to one from the 308 – or rather the other way around. According to Peugeot, the cockpit architecture was actually developed for the crossover and only then decided to use it for the 308, which debuted earlier.

The only difference is the higher seating position. In addition, there is a standard 10-inch digital cockpit and Peugeot’s new infotainment generation with a 10-inch display and another screen directly below for freely assignable menu shortcuts. The impression of quality was very good when we tried the seat for the first time, although it was still a pre-series model.

In terms of equipment lines, it starts with “Allure”. Here, among other things, partial leather seats, two-zone automatic air conditioning, parking aid with 180-degree camera, LED headlights and infotainment with navigation are standard. Above that are “Allure Pack” and “GT”. The former basic equipment “Active“Peugeot has dropped all model series from the program due to a lack of demand. (Connectivity check in the new Peugeot 308)

Rear with little headroom and plenty of legroom

There is ambivalence when it comes to the space in the rear. On the one hand, there is a lack of headroom. Due to the sloping roof, it gets narrow above the crown from a height of 1.80 m. The sense of space also suffers from the narrow windows and the small rear window. On the other hand, thanks to the long wheelbase, the legroom is more than princely, even for tall people.

Unfortunately, the seating position for adults is suboptimal, because the flat and too short seat means there is not enough leg support. A circumstance that the 408 inherits from the 308. Nevertheless, anything less than a two-hour drive shouldn’t be a problem, even for adults in the rear.

Surprisingly much space in the trunk

There is nothing to complain about given the amazingly deep trunk. With a loading volume of 536 to 1611 liters (65 liters less in each case with the plug-in hybrids), the 408 even beats the 3008. Of course, the loading height is limited by the sloping roof line and the loading sill is a little higher. But that also applies to the competitors in this class – so nothing that you can specifically chalk up to the 408.

The powertrain range is the same as that of the 308, but has been reduced somewhat for the 408. Neither the 110 hp petrol engine nor a diesel are available for the crossover. It starts instead with the 130 hp three-cylinder petrol engine. Above that are two plug-in hybrids with 180 and 225 hp system output and each around 60 kilometers of electric range.

An eight-speed automatic is always on board. All engines also drive the front wheels. There is no four-wheel drive – we remember, the 408 should not be an SUV. A mild hybrid and a fully electric version will follow later. The hybrid replaces the petrol engine, the electric car could form the basis for the new Opel Manta crossover in the Stellantis Group. (All information about the environmental bonus)

According to Peugeot, the market launch for the 408 is in January 2023. What the car will cost has not yet been communicated. If you count on a comparably equipped 308 but with a little crossover bonus on top of that, then the 408 should start at around 35,000 euros. It would be a lot more expensive than the Renault Arkana, but it would also offer more space. (This is how buying a new car works on the Internet!)