Facebook Twitter LinkedIn Tumblr Pinterest Reddit VKontakte Odnoklassniki Pocket
Many modern cars are now equipped with LED headlights. Not only the longer service life is an advantage of this technology – LED lamps also illuminate the road better and use less electricity. Until recently, there were LED retrofit lamps for older cars to be bought, but they were not approved and, because of their dazzling effect, also represented a great danger.
The first legal possibility to retrofit an LED lamp on some vehicles with H7 lamps was the Osram Night Breaker LED. A short time later, Philips followed up with the Ultinon Pro6000 H7-LED. Now, with the Philips Ultinon Pro6000 H4-LED, there is also the option of equipping selected vehicles with H4 headlights with LED light. You can find out here how this works and for which vehicles the LED retrofit lamp is approved.

Advantages of the retrofit LED

Thanks to the “Philips Airboost Technology” (a cooling system integrated in the LED lamp), Philips promises a with the Ultinon Pro6000 H4-LED Lifespan of up to 3000 hours. In addition, the Retrofit LED up to 230 percent brighter light compared to the legal minimum standard for halogen lamps. The LED should produce a light color of 5800 Kelvin. According to Philips, this should enable you to recognize road signs and obstacles at an early stage and delay eye fatigue. The recommended retail price of the Philips Ultinon Pro6000 H4-LED is 139.99 euros. 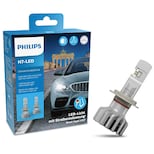 The H4 LED retrofit lamp is approved for these cars

The Philips Ultinon Pro6000 H4-LED may only be installed in vehicles for which the retrofit LED lamp has received a general type approval. According to Philips, neither adapter rings nor Canbus adapters need to be used for installation, the H4 lamp is simply replaced by the Ultinon Pro6000 H4 LED. The general type approval must be carried in the car at all times after installation. If you want to know exactly for which cars the Philips Ultinon Pro 6000 H4-LED is approved, you can take a look at the compatibility list from Philips.