Facebook Twitter LinkedIn Tumblr Pinterest Reddit VKontakte Odnoklassniki Pocket
Endorphins bubble, dopamine bubbles, serotonin overflows. Testosterone is also at the start. After all, we’re talking about the powerful force of 500 hp in an appetizing shell made of steel, aluminum and carbon fiber plastic. And yes – you have to start with such flowery descriptions if you want to even hint at the heat of this new Porsche. There is a lot of the ultra-strong big brother 911 GT3 in the Cayman. 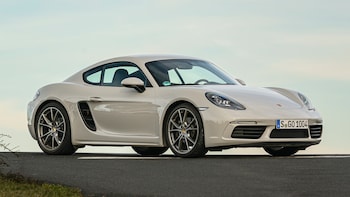 Get the best offers for the Porsche Cayman 718 Cayman S and save up to €3698 compared to the RRP at carwow.de.

The engine, chassis, brakes and aerodynamic tricks then mix with the light and agile mid-engine concept of the 718 to create an undreamt-of marvel when it comes to driving machines. The chassis also plays a big part in the accuracy of the 718 Cayman GT4 RS. The wishbones – guided by the ball joint connections to the body – keep the car stiff and taut against lateral forces. In addition, aerodynamic downforce presses the flounder to the road, 325/30 tires on 21 inches at the rear weld the car to the asphalt surface. In short: the thing almost locks itself with the course.

The 500 HP push quite powerfully

The drive block of four-liter six-cylinder boxer and seven-speed PDK then puts the crown on the whole thing. The crankshaft rotates at up to 9000 revolutions per minute – in an almost burstingly active way. Sure, up to 4000 tours he can also use the glide mode, sorted the gears smoothly under light load, sounding dry and mechanically reserved. But everything about it is insane. Spontaneously, greedy for the red area and vulgarly nagging at the rev limiter in manual transmission mode, the boxer whips the 500 hp through the transmission.

The automatic also knows no slacking long overdrive – until the bitter end (according to Porsche at 312 km / h) the PDK loads the speeds wide awake. At this point everything starts again. At least lyrically. The now effective sound spectacle is unique. Because the intake system, consisting of a quivering carbon fiber airbox, flow-modulating valve system and six individual throttle valves locked together, feels like it slurps directly at the brain stem.

The beast breathes behind the heads of the passengers

In fact, the Porsche draws its process air through the rear side windows, then directs it into the four-liter naturally aspirated engine directly behind the heads of the driver and front passenger. The boxer is attached to the body with particularly hard bearings, blows exhaust gases out through a thin-walled titanium exhaust system and has also stretched its whimpering ancillary units in the direction of the passenger compartment. Because it’s basically an engine from the 911 that, for reasons of space, was rotated 180 degrees and tucked into the engine compartment of the Cayman.

The interior is more conventional, but absolutely fitting. Tight carbon fiber shells ex works, the Clubsport package including a roll cage as an extra, even lighter and more sophisticated components (part of the Weissach package that costs 15,815 euros) then finally complete the feeling: I never want to leave here again! Just addictive, the yellow flounder.