Renault once founded the van segment in Europe, but the French have recognized the signs of the times and are saying goodbye to the well-behaved vehicle category. The compact representative Scénic was even one of the manufacturer’s bestsellers for years, but dwindling sales figures meant the end of the model in spring 2022, and the Grand Scénic is likely to follow soon. But the traditional model designation should live on. 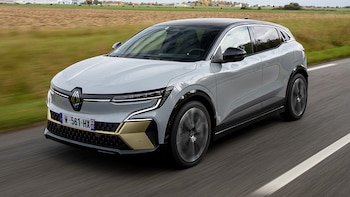 Renault models at a discount

There are many new cars with attractive discounts on carwow.de, including many Renault models.

The “Scénic Vision” concept study gives a glimpse of the future of the French car and relies on a new type of hydrogen hybrid drive. The production model is scheduled to come onto the market in 2024, but initially with technology from the Mégane E-Tech Electric. AUTO BILD has it concept car already watched.

Design and dimensions: Beefy design for the SUV

At 4.49 meters, the “Scénic Vision” is two centimeters shorter than its conventionally powered brother, the Austral. However, since it is only 1.59 meters high and a full 1.90 meters wide, the Scénic of the future looks a whole lot beefier. This effect is enhanced by the lush 21-inch wheels in aero design, the stretched wheelbase of almost 2.84 meters and the expressive front of the SUV strengthened. The latter clearly bears the signature of the new chief designer Gilles Vidal, who switched from Peugeot to Renault in 2020.

So it’s no wonder that the Scénic Vision also got daytime running lights in its typical saber-tooth style. In the study these are in the shape of half a diamond, no doubt a nod to the Renault logo. Another novelty from the brand is the illuminated graphic with the four individual LED elements. The boxy basic shape of the grille-less front evokes memories of that concept car Renault 5 Electric awake.

In the side view, the light strips in the C-pillar, the missing B-pillar and the doors that open in the opposite direction are particularly noticeable. Both study-typical design gimmicks that will probably not make it into production. The rear with its narrow LED taillights, which also represent half a rhombus, looks quite close to series in some points. The rear view has a hint of Cupra overall, which is probably mainly due to the thin lighting units.

Interior: The interior of the study looks close to series

Inside it is much more spectacular, which is also due to Renault’s new definition of ambient lighting. A wide panel with futuristic-looking colors stretches around the entire passenger compartment. They are constantly changing and thus bring dynamism to the interior.

The “steering wheel” could also come from a science fiction film and is somewhat reminiscent of Tesla’s controversial yoke and the angular valance of the Toyota bZ4X. Below the windshield there is another screen that stretches almost across the entire width of the vehicle and uses a camera to depict the entire area in front of the vehicle. This should increase the field of vision by more than 24 percent. A total of ten small touchscreens are installed in the front row, which look like smartwatches and serve various functions. The widgets attached to the interior door panels can be used to adjust the seating position, for example.

Safety: The airbags move into the seat

Thanks to a new technology that Renault calls “Cocoon Airbag”, the dashboard could be kept emphatically narrow and minimalist. The air cushions are housed in the seats and nestle around the bodies of the passengers in the event of an impact. According to the manufacturer, a high value was attached to passive and active safety when the study was designed.

Because accidents are almost always caused by human error, Renault has equipped the Scénic Vision with three new technologies that together should reduce the number of fatal accidents by up to 70 percent. The so-called “Safety Score” should soon find its way into series models. The system evaluates the respective driving style and then gives the driver suggestions for improvement. The “Safety Coach” warns the person behind the wheel of risks such as particularly winding roads or dangerous intersections at an early stage. This is done on the basis of evaluated environment and navigation data.

And under the name “Safe Guardian”, the carmaker would like to offer a system in the future that uses sensors and a camera to monitor the driver’s fitness to drive and health. If, for example, he is too tired, he is prompted with signals to take a break.

However, the real highlight of the Scénic Vision is its future-oriented drive. Renault gives a preview of a decidedly green hybrid drive. In everyday use, it is a normal electric drive, but it has that on long journeys concept car However, compared to conventional electric cars, the French have an ace up their sleeve in addition to the battery and the 218 hp (160 kW) strong rear engine installed a 15 kW fuel cell, which charges the battery while driving and sits directly behind it in the underbody of the vehicle. Up to 800 kilometers should be possible without a charging stop. Only the 2.5 kg hydrogen tank positioned at the front has to be filled about every three hours. Ideally, this process takes less than five minutes.
But the concept has another advantage. Since the range extender guarantees long-distance ranges, the battery, which can feed its contents back into the power grid if required, can be deliberately kept compact and light. This not only has a positive effect on the vehicle’s efficiency and shorter charging times. The production of the 40 kWh power storage unit is less energy-intensive than its competitors, while at the same time the required quantity of critical raw materials such as lithium or nickel is reduced and production costs are lower.
But Renault is also aware of the lack of infrastructure and the low availability of hydrogen, which is why the manufacturer does not believe that the hydrogen hybrid will be ready for series production until the end of the decade. Therefore, the production version from 2024 must first be presented as fully electric.

Sustainability: The magic word is recycling

According to Renault, the Scénic Vision has a 75 percent smaller CO2 footprint than other comparable electric cars. And that’s not only due to the smaller battery, but also to an emphatically sustainable basic philosophy. The platinum in the fuel cell, for example, is said to be completely recycled and comes from discarded car catalytic converters.

80 percent of the raw materials contained in the lithium-ion battery are to be recycled from 2030 and used in new Renault batteries. In addition, the French Renault plants in Flins and Cléon, from which the two essential components come, are to produce in a climate-neutral manner from 2025.