Facebook Twitter LinkedIn Tumblr Pinterest Reddit VKontakte Odnoklassniki Pocket
The Toyota Land Cruiser is available from us in the J15 version, which has been built since 2009 – and thanks to permanent four-wheel drive and high-torque diesel for the joy of off-road fans. Toyota has given the Land Cruiser a few modernizations over the years, but the basic ingredients have remained the same. And that also includes the four-cylinder diesel, the latest version of which is the 204 hp from a displacement of 2.8 liters. 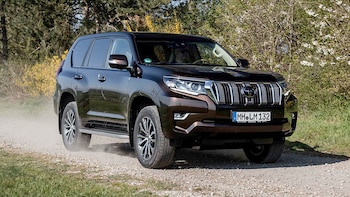 Toyota Land Cruiser at a discount

Up to 500 Nm ensure that the off-road vehicle, which weighs at least two tons, moves effortlessly even on rough terrain. Toyota demands at least 46,400 euros for the entry-level model. With the right provider, however, things are quite different. At carwow.de, you can save up to 10,485 euros on the list price (as of April 3, 2022).

who the highest discount wants, who has to resort to the top version called “TEC Edition”. In addition to the basic ingredients ladder frame, rear rigid axle, more permanent four wheel drive and 2.8-liter diesel including automatic transmission, the Land Cruiser has a lot more to offer as a TEC Edition. The Toyota has an electric glass sunroof, wood applications adorn the leather steering wheel, and the so-called crawl control is intended to make the slowest possible excursion into rough terrain even more controlled. With all these standard features on board, the Toyota Land Cruiser TEC Edition costs at least 74,890 euros according to the list.
At carwow.de, prices start at 65,295 euros, which corresponds to a discount of 9,595 euros or around 13 percent (note, the transfer costs reduce the price). discount for a few hundred euros). If you give the all-wheel drive optional extras such as the third seat or a metallic finish, the price is up to 10,485 euros discount inside. (Here you will find all information about buying a new car on the Internet!)

An off-road vehicle does not always have to be luxurious, but can also be used as a workhorse, especially in the forestry sector. It is sometimes worthwhile to go for the basic version, and thanks to the better angle of departure, the 3-door can also make more sense.

Typically, Toyota calls 204 for the entry-level Land Cruiser hp strong diesel, permanent All-wheel drive and manual transmission still 46,400 euros. Of this, at least 5606 euros can be saved at carwow.de, what a discount of twelve percent (note, the transfer costs reduce the discount by a few hundred euros). The 3-door in the second-highest equipment variant, Executive, saves around 7,800 euros.

Jamie Oliver stainless steel pan for only 44.99 euros at Amazon