Facebook Twitter LinkedIn Tumblr Pinterest Reddit VKontakte Odnoklassniki Pocket
Step by step, Peugeot is driving the change in mobility in its own fleet. In addition to numerous plug-in hybrid versions, there are currently four fully electric French models to choose from. Among them is of course an SUV, namely the compact 2008. With the introduction of the second generation of the smallest Peugeot SUV in 2019, the e-2008 was also offered for the first time and is enjoying growing popularity. The electric 2008 is only available in one power level and is always powered by a 100 kW (136 hp) electric unit. Peugeot specifies 260 Nm as the maximum torque. In terms of range, the e-2008 cannot quite keep up with competitors such as the e-Niro, but the battery pack with a capacity of 50 kWh allows up to 342 kilometers without stopping at the charging station. At least when it comes to the purchase price, you don’t have to make any major compromises. In addition to the high discounts at carwow.de, the Internet provider’s spring campaign ensures particularly generous savings on selected models with short delivery times. This also applies to the e-2008. According to the list, the e-2008 costs at least 35,450 euros, at carwow.de there is currently a discount of up to 12,444 euros on the electric French (As of March 27, 2022). The environmental premium is already included here. 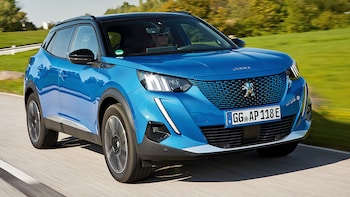 In order to get the biggest discount, you have to go to carwow.de and grab the top version of the electric Peugeot, the e-2008 GT Pack. In terms of drive, this version does not differ from the basic model, but there are worlds between the two models in terms of looks and comfort. The standard equipment of the GT Pack includes full-LED headlights, the navigation system with a 10-inch touchscreen, adaptive cruise control and special 18-inch alloy wheels. Peugeot generally charges 41,050 euros for this extensive range of equipment, while prices for the top model on carwow.de start at 29,496 euros. In addition to the environmental bonus taken into account, this corresponds to a discount of 2554 euros. Anyone who treats the 100 kW electric vehicle to a few paid extras can increase the discount for the e-2008 to up to 12,444 euros including environmental bonus. But the discount on the basic e-2008 is also impressive. Instead of the 35,450 euros RRP, only 24,288 euros are due at carwow.de, a total discount of 11,162 euros including environmental bonus (note: the transfer costs reduce the discount by a few hundred euros in both cases). The current delivery time is four to six months.

Galaxy A51: Owners can look forward to an update