Facebook Twitter LinkedIn Tumblr Pinterest Reddit VKontakte Odnoklassniki Pocket
Just a few days ago, Ford gave a first look at the new generation of the European Ranger. Visually, the pick-up is closer to its US brother F-150 thanks to its beefier design, and a lot is happening under the new body as well. Because Ford and VW commercial vehicles develop the Ranger and Amarok series together, the Ranger benefits in two ways – for the first time it will be Europe’s best-selling pick-up from 2022 with both a V6 diesel as well as one permanent four-wheel drive give. But it will be a while before the new one is in the showrooms. The announcement alone is enough to drive the prices of the current Ranger down. Bargain hunters who need a versatile pick-up currently benefit from gigantic discounts with the right provider – up to 21,498 euros are possible (As of December 5, 2021)! 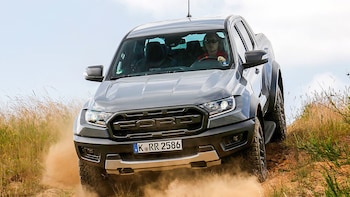 Since the starting prices are between 35,808 and over 70,000 euros, depending on the version, you should look carefully at carwow.de to see how much discount there is on the desired version. Those who are aiming for the maximum discount should soon be driving up to the top model of the series, the Ranger Raptor. Based on the legendary F-150 Raptor, the Ranger was tuned for maximum off-road performance. More ground clearance, larger angle of approach and departure and, last but not least, a magnificent chassis give the Ranger an additional dose of emotion and off-road competence. According to the list, Ford requires at least 70,026 euros for the 213 hp Raptor with all-wheel drive and ten-speed automatic transmission. At carwow.de, the prices for the pick-up start at 49,467 euros, which is 20,559 euros below the recommended retail price. That corresponds to a discount of 29 percent! If you donate a few of the few optional features (e.g. a parking heater) to the Raptor, you not only get the best currently available Ford Ranger, but can also drive the discount to the said 21,498 euros. There is still a minimal damper: the transfer costs reduce the discount by a few hundred euros. (Here you can find all information about buying a new car on the Internet!).

Ford Ranger in the basic version with a discount of 10,000 euros

Businesspeople generally prefer to use the basic version of the pick-up. With the Ford Ranger (and most other pick-ups), this approach not only means that you have to forego performance and all kinds of equipment, but that you also lose space in the interior. While the Raptor only comes with a double cabin, the entry-level version is the model with a single cabin and a particularly long loading area. As a rule, Ford charges 35,808 euros for the Ranger with a single cabin in the “XL” version. In return, you get a real workhorse with a 130-horsepower diesel, six-speed manual switch and steel rims. So exactly what commercial customers are looking for. At carwow.de, buyers of single cabins can also save: The offers for the Ranger XL start at 25,754 euros and thus 10,054 euros under the list. In percentage terms, the Raptor and the basic version are almost on par in terms of discounts. With the difference that the transfer costs incurred here are a little more significant.

Identifying photo subjects: where are my pictures taken?