Facebook Twitter LinkedIn Tumblr Pinterest Reddit VKontakte Odnoklassniki Pocket
Toyota is not only world-famous for its modern hybrid fleet with low fuel consumption, but also has a lot to offer in the field of off-roaders. In addition to the Land Cruiser, the Hilux pick-up in particular ensures the brand’s positive 4×4 image. And that for over 50 years. The series is now in its eighth generation, which was recently thoroughly revised with a facelift and upgraded with a new top model and an additional engine. Now, in addition to the well-known 2.4-liter four-cylinder diesel, there is also a 2.8-liter diesel engine with 204 hp. As the Hilux Invincible, the pick-up truck impresses not only with its more powerful engine but also with its significantly more powerful look. Although the facelift isn’t even my year old, you can already save a lot of money buying the Toyota Hilux. With the right provider, discounts of up to 8352 euros beckon on the robust all-terrain long-runner (As of December 12, 2021). 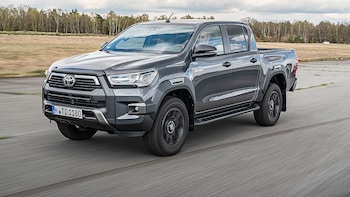 As is usual for the pick-up category, the configuration options seem almost impossible. The Hilux is also available in three body styles, with or without all-wheel drive and in a total of four equipment variants. Bargain hunters who want to get the maximum discount have it easy and have to choose the top model of the series, the Hilux Invincible as a double cab with 2.8 liter diesel. Equipped in this way, not only the 204 hp unit is part of the basic equipment, but also comfort features such as leather seats, a 360-degree camera, a navigation system and black running boards. When it comes to robustness and off-road suitability, Toyota makes no compromises and is sending both the 150 hp models and the more powerful pick-ups with up to 310 millimeters of ground clearance and a fording depth of 700 mm into the race. The higher torque of the 2.8-liter diesel (500 instead of 400 Nm) gives the Invincible clear advantages off-road. According to the price list, the Hilux top model as a double cab with six-speed automatic and all-wheel drive costs at least 55,371 euros. At carwow.de, the prices for this model start at 48,267 euros, which is 7,104 euros below the recommended retail price. With a few optional features on board, the discount can then grow to 8,352 euros. Attention: The transfer costs reduce the discount by a few hundred euros. (Here you can find all information about buying a new car on the Internet)

Single cab with a 13 percent discount

Anyone who is critical of the last modernization measure and thus also of the top model can still be happy. Because at carwow.de there are, in some cases, lavish discounts on all model variants. The inexpensive Duty variant is primarily intended for use in trade. As a duty, the Hilux is not only available as a single cab, but also as a pure rear-wheel drive car. Compared to the Invincible, this model, which is significantly slimmed down with the 150 hp 2.4-liter diesel under the hood and a manual gearbox on board, is characterized by its particularly low price. Toyota calls for the Hilux entry gross of 28,477 euros. At carwow.de, the prices for the SingleCab start at 24,873 euros, around 13 percent below the list price. Here too, however, the transfer costs reduce the discount by a few hundred euros.

E-car: Why fear of range is diminishing with e-cars